The U.S. Army Fears Russia's (And Others) 'Helicopter-Killer' Mines 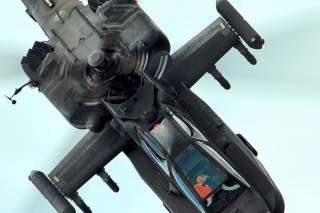 As if anti-aircraft missiles and guns aren't, helicopters have begun to face a new threat: the anti-helicopter mine.

No, these are not regular land mines buried in the ground, waiting for an unwary chopper to touch down. They're actually sophisticated, radar-controlled air defense weapons that have developed by several nations, notably Russia and Bulgaria.

And now the U.S. Army is worried enough about them that it wants some kind of countermeasure. In a new research proposal, titled "Anti-Helicopter Mine and Improvised Explosive Device Countermeasures," the Army compares the threat faced by helicopters to those faced by foot soldiers and vehicles from IEDs. Just as buried explosives spurred the U.S. military to develop counter-IED technology, such as jammers that neutralize the radio links that control the devices, now the Army wants something similar to disable anti-helicopter mines as well as regular IEDs used in an anti-helicopter role.

It's not that the U.S. doesn't already have a great deal of experience with anti-helicopter mines. The North Vietnamese and Viet Cong used a variety of anti-helicopter booby traps, including explosives mounted on poles, which would explode when a chopper touched down. In turn, the Americans bombed landing zones to detonate mines before the helicopters went in.

An Islamic terrorist group also released a video in 2013 of what seems to be an improvised anti-helicopter fragmentation mine. And, of course, old-fashioned machine guns and RPGs have been the nemesis of helicopters for a while.

Nonetheless, the purpose-built anti-helicopter mines are far more sophisticated and dangerous. The Army specifically cites "the fielding of anti-helicopter mines by Russia and Bulgaria." Bulgaria, which seems to have developed these devices as far as as the late 1990s, offers several mines such as the AHM-200, a 200-pound device which looks like a mortar tube mounted on a tripod. The mine, which is emplaced on the surface rather than buried in the dirt, has an acoustic sensor which arms the weapon when it picks up the sound of the helicopter as far away as 1,500 feet. At a range of 500 feet, a Doppler radar tracks the target. When the helicopter gets within 300 feet, the mine detonates both an explosively formed projectile and an explosive charge packed with steel balls.

A 2012 Russian news video shows what looks a similar device. A Russian expert in the video claims that anti-helicopter mines were developed because shoulder-fired anti-aircraft missiles are ineffective against helicopters flying lower than 300 feet.

Other nations have also developed anti-helicopter mines. Poland has one, while Austria has developed an infrared-guided version.

The Army's project will have three phases, beginning with identifying what anti-helicopter mines and IEDs are out there, their fuzing and kill mechanisms, and how they are employed. Finally, a prototype will be developed, and then the Pentagon will decide whether to go ahead and build the system.

Interestingly, the U.S. Army proposal doesn't provide any guidance on what kind of defense it think would stop anti-helicopter mines. It does acknowledge that "rotary wing aircraft have technical and operational vulnerabilities that include flight below 1000 feet Above Ground Level (AGL), a unique set of audio signatures as well as the operational requirement to land on short notice on unsecured terrain."

Perhaps one approach would be spoof the mine's sensors so it prematurely detonates, or masking a helicopter's acoustic signature so the mine doesn't recognize a helicopter as a helicopter.

Considering how heavily the U.S. military relies on helicopters, especially when IED make roads too dangerous for vehicles, anti-helicopter mines are bad news. The news will be even worse when insurgents and terrorists inevitably get their hands on them. But there is one bright spot:  the Army says that "it is preferable to identify the best potential countermeasures before this emerging threat can adversely impact U.S. and allied operations." Which suggests that the Pentagon views these mines as a looming danger, but one that has yet to affect U.S. operations.