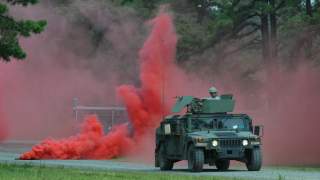 In future high-end conflicts, strategic mobility and tactical agility will be critical to U.S. Army operations. Based largely in the Continental United States, Army units will have to be moved by air and sea long distances to the theater of conflict. Once in theater, these units will have to be constantly on the move to avoid being subject to hostile fires. The Chief of Staff, General Mark Milley, describes the challenge for operational and tactical maneuver this way:

With sensors everywhere, the probability of being seen is very high. And as always, if you can be seen, you will be hit. And you’ll be hit fast, with precision or dumb munitions, but either way you’ll be dead. So that means just to survive, our formations, whatever the wire diagram looks like, will likely have to be small. They will have to move constantly. They will have to aggregate and disaggregate rapidly. They’ll have to employ every known technique of cover and concealment.

The U.S. military is one of the few in the world capable of airlifting large, well-equipped ground formations over great distances and deploying them directly into combat. This capability is likely to be more important in future high-end fights given the vulnerability of fixed installations. By threatening peer competitors with attacks from multiple directions, even behind an enemy’s front lines, the U.S. military can create multiple dilemmas for an adversary.

But to be truly effective in this role, once delivered by air onto a landing zone, ground units need to be mobile. While the Air Force can move even the heaviest armored combat vehicle by air, the number that can be carried on a single C-17 or C-5 is quite limited.

Moreover, the Army’s fleets of combat and support vehicles have been getting heavier. Older systems such as the Abrams tank and Bradley Fighting Vehicle have gained weight steadily as new capabilities such as active protection systems are added. Newer vehicles such as the Joint Light Tactical Vehicle (JLTV) and the Armored Multi-Purpose Vehicle are larger and heavier than their replacements. As a result, it will be increasingly difficult to move many units and their equipment by air.

With its rugged design, relatively light weight and ability to carry up to two tons of payload, the Humvee is particularly well-suited for aerial deployment. There is a great video available online that shows eight 12,000 pound Humvees dropped out of a C-17 flying at 5,000 feet. The Humvee also can be sling-loaded underneath a Black Hawk helicopter. Once on the ground, Humvees are almost instantly ready for use, whether as a troop transport, gun or missile carrier, logistics vehicle, command control and communications platform or ambulance.

The Humvee is the quintessential mobile and agile vehicle. The 1100 series of Expanded Capacity Humvees have improved engines, power trains and suspensions that allow them to operate in all terrains with payloads as high as 5,500 pounds, depending on the amount of protective armor carried.

The reality is that the Army needs the Humvee, particularly for the kind of high-intensity fights that may occur in Europe or the Far East. The good news is that it has a lot of Humvees. Today, the Army has over 100,000 Humvees spread across the Active and Reserve Components. The Army’s long-term tactical wheeled vehicle strategy envisions replacing about half of the Humvee fleet with JLTVs at a cost of approximately $39 billion over the next two decades. But the proposed JLTV acquisition will not be completed until around 2040.

Even then, more than half the Army’s light tactical vehicle fleet will consist of Humvee variants. While acquiring more JLTVs might strike some in the Army’s leadership as a good approach, budget realities and the higher demand to modernize many other vehicle fleets makes it certain that the Humvee will remain in the force for decades to come.

The Army knows that it must modernize Humvees that will remain in active service. In order to maintain the utility of the Humvee fleet for the next several decades, the Army needs to refurbish these vehicles, provide many of them with more powerful engines, better transmissions and more robust suspension systems. The Army currently recapitalizes around 1,200 Humvees annually at a cost of some $150 million.

Recapitalization involves rebuilding existing vehicles to an updated configuration at which point it is in “like new” condition. Doubling this figure to 2,500 vehicles a year for an additional cost of about $150 million a year would put the Humvee fleet on a path to full recapitalization by the time the currently planned procurement of JLTV ends. The overall effect of this arrangement would be to provide the Army with a modernized light tactical vehicle fleet.

It is therefore a surprise that the Army has put no additional money against Humvee recapitalization. Each year that recapitalization money is not in the budget, the Humvee fleet ages a year. This creates a potential bow wave that will have to be addressed at the same time the Army will be attempting to field new systems and platforms to address a number of its modernization priorities. For a relatively modest expenditure, the Army can solve its Humvee recapitalization problem in the near-term.