Is the US Army Ready for a Shocking Technological Revolution in Land Warfare? 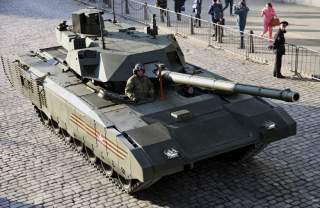 The United States Army foresees a revolution in ground combat unfolding over the next several decades, but the exact nature of that fundamental change is unclear. Indeed, the Army’s top leadership compares the coming revolution to the introduction of the stirrup, rifled barrels or even mechanized warfare. But this revolution will be a change in the technological character of warfare; the “immutable” nature of war continues to remain a constant as it has throughout human history.

“I think we are on the cusp of a fundamental change in the character of ground warfare,” U.S. Army chief of staff Gen. Mark Milley told an audience at the Center for Strategic and International Studies in Washington, D.C., on June 23. “It will be of such significance that it will be like the rifling of a musket or the introduction of a machine gun or it will have such significance impact as the change from horse to mechanized vehicles.”

Revolutionary new technologies such as nanotechnology, robotics and artificial intelligence will drive that fundamental change. But while Milley said that a revolution is coming, how exactly the character of ground warfare will shape up remains an open question. “Exactly what that’s going to look like, I don’t know,” Milley said. “I just know that we’re there. We’re on the leading edge of it. I think we’ve got a few years to figure it out—probably less than ten. But I think by 2025, you’re going to see armies—not only the American Army but armies around the world—will be fundamentally and substantively different than they are today.”

Indeed, some of the harbingers of that future could already be here in prototype form. One potentially revolutionary technology could be an exoskeleton that greatly enhances the physical capabilities of individual soldiers. While even five years ago such technologies were the purview of science fiction, prototypes of exoskeletons and other technologies already exist. “They’re not ready for prime time today, but we’re looking at them” Milley said. “I think within ten years things like that are going to be very very possible on the battlefield.”

Meanwhile, for the immediate future, the U.S. Army is ramping up its training to defeat high-end threats that have not been seen since the end of the Cold War. Indeed, especially for the U.S. Army—which bore the brunt of the last 15 years of counterinsurgency war—the new era of renewed great power competition is proving to be a challenge. Milley said there has been an entire generation of officers and noncommissioned officers who have not trained for a full-scale combined-arms maneuver war. Indeed, Milley cited senior armor and artillery officers who have participated in less than one-fifth of the gunnery exercises than their pre-9/11 predecessors had. In the air, Milley spoke of AH-64 Apache gunship crews who have only flown two-ship operations and have never participated in battalion-sized deep attacks or other complex rotary-wing tactics.

But resetting the Army’s training to the pre-9/11 days is not good enough, in some ways modern Russian hybrid warfare strategies are more sophisticated than the threat posed by the massive, but almost purely conventional Red Army juggernaut in Europe during the Cold War. Nor is the counterterrorism fight going away—indeed, in many cases the Army will face off against enemies that combine attributes of conventional forces and unconventional forces. As a result, the U.S. Army is incorporating the lessons it has learnt from observing Russian forces and their hybrid tactics in action in Ukraine into its high-end training. “We have taken lessons learned from what we have seen the Russians do in Ukraine, for example, or Crimea, or what we know the North Korean People’s Army are capable of, what the Chinese army, etc., and we’ve sort of kludged them all together in this hypothetical enemy capability,” Milley said. “Then we developed scenarios that are hypothetical so we can train at the higher-end skills.”

Meanwhile, with the Army being reduced in size, Milley is adopting a structure for some units that could be rapidly scaled up in times of war. Modern armies are difficult to raise from scratch as they have been in previous eras—the character of modern warfare requires sophisticated training. But there are ways mitigate that training time. One strategy is to have in place the command structure for combat units that could be scaled up during times of conflict—which the United States used to do during the 1980s and which Germany did following the Treaty of Versailles.

Milley said that he would create about half-dozen Train, Advise and Assist Brigades over the next five years, which would be used to train foreign forces during peacetime. However, these brigades would have a similar command structure to a fully operational infantry brigade and be staffed by experienced officers and noncommissioned officers. However, the units would not have any frontline soldiers assigned. If war broke out, cadres of new soldiers who would attend basic and advanced individual training together as a cohort and would be assigned to fill-out the skeletal structure of the TAA brigades to form a combat-capable force when needed. “That would considerably shorten the length of time it would take to create units,” Milley said. “We actually did this before. In fact, I was in one of these battalions—that’s where I got the idea."

While the mid-1980s cohort battalion concept was cancelled due to its expense—the new units will be used all the time—defraying the cost problem. Moreover, the new units will incorporate aspects of U.S. Army Special Forces and Foreign Area Officer training in their make up—making them particularly versatile. “Those were incredible battalions, but they were expensive to do,” Milley said. “These guys will be operationally used all the time.”