The U.S. Army Wants a Super Weapon: Combine a Machine Gun and a Grenade Launcher 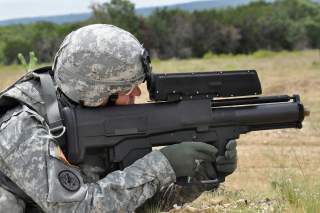 A new weapon with a totally different new type of ammo that is not yet even in the developmental phase.

The U.S. Army is in the early stages of beginning to draft requirements for a new externally-mounted weapon to replace both the M2 .50-cal machine gun and the Mk19 grenade launcher.

The idea is to simultaneously lighten the load of mobile attack forces while increasing their lethality and envelope of attack with a single system that achieves the offensive firepower, and desired combat effects, of both weapons.

“This will be one weapon with a totally different new type of ammo that is not yet even in the developmental phase,” Laura Battista, Product Management Engineer, told Scout Warrior in an interview.

The effort is still very much in the early or conceptual phases, however future engineering and requirements initiatives plan to give shape, contours and direction to the new weapon; as a result, Army officials did not yet specify a timeframe as to when this might be operational. However, it is reasonable to assume that requirements, designs and then prototypes could emerge in the next few years.

The details of how this will be accomplished have not yet emerged, however the planning is to engineer a weapon that has the attack and suppressive fire ability of a .50-Cal along with an explosive "area weapon" effect of a grenade launcher.

The new, combined-fires weapons would bring both logistical and tactical advantages. A single unit on-the-move could much more easily attack a wider range of targets with one weapon, both laying down suppressive fire with a machine gun and also achieving the effects of firing grenades at enemy locations when needed.

Meanwhile, the Army will also embark upon a simultaneous excursion to develop a lighter profile barrel for the .50-cal.

“We will have many barrels that will lessen the logistic burden of having a spare barrel all the time. We are also hoping to save a lot of weight. We are hoping to save 16-pounds off of a 26-pound barrel,” Battista explained.

“We always want to lighten the soldier load. A major requirement is to engineer a 60-pound weapon compared to an 86-pound weapon,” Battista said.

The machine gun is currently used on Humvees, tactical trucks, M1 Abrams tanks, Strykers, some Navy ships and several aircraft such as CH-47 Chinook cargo helicopters and UH-60 Black Hawks. The gun can also be mounted on a tripod on the ground by infantry in a firefight or combat circumstance; the M2 has a solid range and can fire at point targets up to 1,500 meters and destroy area targets at distances up to 1,800 meters.

“It can be used for anti-personnel (enemy fighters) and also against lightly armored vehicles and light unarmored vehicles. Any time you get into an up-armored (more armor) situation or reactive armor -- it is not going to be very effective. It works against anything that does not have thick armor,” Maj. Keith Muehling, Assistant Product Manager Crew Served Weapons, told Scout Warrior in an interview.

“If you are a top gunner and you are having to move this weapon around - it is on a pedestal tripod. If it is lighter, you are going to be able to traverse the weapon a little bit easier than a 20-pound heavier weapon. That is one of the added benefits as far as getting it on and off the vehicle. If a soldier can do that by himself that is an added benefit,” Meuhling said.

The M2 uses several different kinds of ammunition, including some rounds engineered to be “harder penetrating.”  The weapon also uses an ammo can with 200 rounds; a top cover can be lifted off and the links between rounds are spaced to provide accurate timing as they are dropped into the weapon, service officials said.