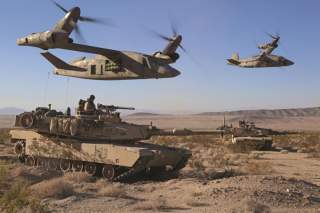 The Army is preparing for the first official flights of two high-tech, next-generation aircraft now being designed with a wide range of abilities to include flying faster, flying farther without needing to refuel, operating in high-hot conditions and having an ability to both reach high speeds and hover like a helicopter.

The new aircraft are part of an Army-led effort, called Joint Multi-Role Technology Demonstrator, aimed at paving the way toward ultimately engineering a new fleet of aircraft for all the services to take flight by 2030.

“Things are moving along very well. We are on schedule with exactly what our industry partners have planned,” he said.

While some of the eventual requirements for the new aircraft have yet to be defined, there are some notional characteristics currently being sought after by the program. They include an ability to travel at airplane-like speeds greater than 230 knots, achieve a combat radius of 434 kilometers, use a stronger engine and operate in what’s called “high-hot” conditions of 6,000-feet and 95-degrees Fahrenheit.

“We had set 230 as the speed requirement because we wanted to push the technology.  We wanted people to bring new ideas and new configurations to the table,” Bailey said in an interview with Scout Warrior several months ago.

A faster, more maneuverable helicopter that can fly farther on one tank of fuel would enable forces in combat to more effectively engage in longer combat operations such as destroying enemy targets or transporting small groups of mobile, lethal ground fighters. The new helicopter will also be designed to use next-generation sensors to find enemies on the move and employ next-generation weapons to attack them, Army officials describe.

The JMR TD technology effort will inform a planned program of record called Future Vertical Lift, or FVL, which will design, build and test a series of next-generation aircraft for the Army, Navy, Air Force and Marine Corps.

.The first flights of the demonstrator aircraft, slated for 2017, will include developmental helicopter/aircraft from two industry teams – Bell Helicopter and a Sikorsky-Boeing team.

The Bell offering, called the V-280 Valor, seeks to advance tilt-rotor technology, wherein a winged-aircraft with two rotor blades over each wing seeks to achieve airplane speeds and retain an ability to hover and maneuver like a helicopter.

“They have an air vehicle concept demonstrator that they call the third-generation tilt-rotor. Their fuselage was completed and it is being delivered to Bell for the build-up of the aircraft,” Bailey said.

Along with Boeing, Bell makes the V-22 Osprey tilt-rotor aircraft which is currently praised by military members for its excellent operational performance in recent years. The Osprey has two rotating rotor blades which align vertically when the aircraft is in helicopter mode and then move to a horizontal position when the aircraft enters airplane mode and reaches speeds greater than 280 knots.

The V-280 Valor also has two propellers which rotate from horizontal airplane mode to a vertical position, which allows for helicopter mode.  Bell officials have said their new aircraft will be able to reach speeds of 280 knots. Bell and Army officials explain that their V-280 Valor substantially advances tilt-rotor technology.

The Sikorsky-Boeing demonstrator, called the SB>1 Defiant, uses a coaxial rotor system configuration. This is a design structure, referred to as a compound configuration, which relies upon two counter-rotating rotor blades on top of the aircraft and a thrusting mechanism in the rear.

“To make a rotorcraft go fast you have to off-load the rotor lift onto something else or else you run into problems when you try to reduce the speed of that rotor. Typically, you do that with a wing but Sikorsky-Boeing came up with a lift-offset design,” Bailey added.

The pusher-prop on the back of the aircraft is a small propeller behind the counter-rotating rotor heads. It is what can give the aircraft airplane-like speeds.  It operates with what’s called positive and negative pitch, allowing the aircraft to lean up or down and move both forwards and backwards, Boeing officials have said.

Some of these technologies will include a “fly-by-wire” technology allowing for a measure of autonomy or automation so that the helicopter can fly along a particular course by itself in the event that a pilot is injured or incapacitated. This is the kind of technology which could, in the future, allow for unmanned helicopter operations.

Along these lines, the Army is looking for technical solutions or mission equipment which increases a pilot's cognitive decision-making capability by effectively managing the flow of information from an array of sensors into the cockpit, Army program managers have explained in previous statements on the Army's website - Army.mil

The idea is to manage the volume of information flowing into the aircraft and explore how to best deliver this information without creating sensory overload. Some of this information may be displayed in the cockpit and some of it may be built into a helmet display, Army officials said.
Manned-Unmanned teaming, also discussed by Army developers, constitutes a significant portion of this capability; the state of the art with this capability allows helicopter pilots to not only view video feeds from nearby UAS from the cockpit of the aircraft, but it also gives them an ability to control the UAS flight path and sensor payloads as well. Future iterations of this technology may seek to implement successively greater levels of autonomy, potentially involving scenarios wherein an unmanned helicopter is able to perform these functions working in tandem with nearby UAS.
COUNTERMEASURE SYSTEMS

Integration is key to the Army's Mission Systems strategy, as the overall approach is aimed at fielding an integrated suite of sensors and countermeasure technologies designed to work in tandem to identify and in some cases deter a wide range of potential incoming threats, from small arms fire to RPGs, shoulder-fired missiles and other types of attacks, Army statements have said.

One such example of these technologies is called Common Infrared Countermeasure, or CIRCM, a light-weight, high-tech laser-jammer engineered to divert incoming missiles by throwing them off course. CIRCM is a lighter-weight, improved version of the Advanced Threat Infrared Countermeasures, known as ATIRCM, system currently deployed on aircraft.
CIRCM, which will be fielded by 2018, represents the state of the art in countermeasure technology, officials said. Future iterations of this kind of capability envisioned for 2030 may or may not be similar to CIRCM, Army developers have said. Future survivability solutions will be designed to push the envelope toward the next-generation of technology, servcie information explains.

The mission equipment for the new aircraft will be tailored to the new emerging designs, service developers said.

The new helicopter program is also working with its industry partners to develop a new technology which might improve upon the state-of-the-art Modernized Target Acquisition Designation Sight/Pilot Night Vision Sensor, or MTADS, systems currently deployed on helicopters; MTADS sensing and targeting technology provide helicopters thermal imaging infrared cameras as well stabilized electro-optical sensors, laser rangefinders and laser target designators, according to Army statements.
The current, upgraded MTADS currently deployed on aircraft throughout the Army were engineered to accommodate the size, weight and power dimensions of today's aircraft, dimensions which will likely change with the arrival of a new Air Vehicle built for the new JMR demonstrator aircraft.