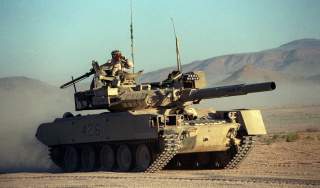 With the resurgent threat of Russia and the growing power of the Chinese People’s Liberation Army Ground Forces, the U.S. Army is working on developing ways to increase the firepower resident within its infantry brigade combat teams (ICBT).

One such effort is the Mobile Protected Firepower (MPF) program, which aims to provide a company of vehicles—which the Army adamantly does not want to refer to as light tanks—to brigades from the 82nd Airborne Division or 10th Mountain Division that can provide heavy fire support to those infantry units. The new vehicle, which is scheduled to enter into full-scale engineering and manufacturing development in 2019—with fielding tentatively scheduled for around 2022—would be similar in concept to the M551 Sheridan light tank. The Sheridan used to be operated the Army’s airborne units unit until 1996, but was retired without replacement.

The Army does not want a “new” vehicle per se, rather, the service wants something that it can quickly put into production in the shortest amount of time at the lowest possible cost. “What we have said in MPF is: We’re not willing to wait for you to go through a lengthy bottom-up design process,” Maj. Gen. David Bassett, the Army’s program executive officer for Ground Combat Systems told reporters at the Association of the United States Army annual meeting on Oct. 5. “What we are willing to do is to give you some time on your own to get a design ready to compete and then we’ll evaluate that into a fairly rapid engineering, manufacturing development phase.”

The Army has not quite fully figured out what kind of resources it has available for the MPF program, but the service is focused on keeping the cost and schedule under control using the Marine Corps’ Amphibious Combat Vehicle (ACV) program as a model, Bassett said. The key is to have at least two competing designs. Ideally, the Army would benefit from having multiple contractors competing for the program. And there are already indications that the competition to secure the MPF tender will be fierce.

General Dynamics Land Systems has already built a prototype technology demonstrator based on what it knows of the Army’s requirements based on technology from the Abrams main battle tank, the now-defunct Future Combat Systems and the British AJAX combat vehicle. Called the Griffin, the new technology demonstrator weighs less than 30 tons and has the ability to mount scalable protection and active protection systems. Meanwhile, BAE Systems showed off the XM8 Armored Gun System—which was originally developed in the 1990s to replace the Sheridan before it was cancelled. The XM8 weights roughly 25 tons with its Level III armor package.

But while the prospective contractors are pitching light tank designs, the Army is open to a wide range of possibilities for the MPF and is willing to make trade-offs, Bassett said. For example, the Army’s requirement for the MPF’s maximum weight is to be no more than 32 tons. However, Bassett pointed out, if the vehicle is intended to be to be airdropped, that would be far too heavy.

“We wanted to be sure at this stage that we left our requirements broad enough so that we understood the full realm of what can be possible,” Bassett said. “We’re not saying we want a light tank, we’re saying we want a system for the infantry brigade combat team that offers mobility, protection and firepower. We’re giving the technical requirement in terms of how much mobility, how much protection and how much firepower.”

Col. Jim Schirmer—the Army’s program manager for the MPF—said some of the characteristics of the vehicle are known just because of the types of environments it will be required to operate in. The MPF will have to travel with the infantry over “austere” environments, which will mandate a machine smaller than the Abrams because the terrain—marshes, urban alleys etc—can’t support heavier armor. Nonetheless, the Army wants a tracked vehicle, Schirmer said, because those are most effective at crossing rubbled buildings, burned out cars and other similar obstacles. “The ability to move with the infantry is pretty important,” Schirmer said. “I think that drove some of the mobility requirements as well the desire to keep it fairly small.”

While the MPF will not be a large vehicle, it will pack a punch. It will be armed with a cannon—either a 105mm or 120mm gun. The Army wants to use a shell that it already has in its inventory for the sake of logistics. “The desire is to keep the weapon to something that is already in the Army inventory—so that would probably mean a 105 or a 120 with the lower threshold set at 50,” Schirmer said. “We don’t want to develop a new suite of ammunition.”