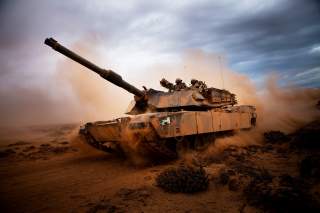 US Army war-planners and weapons developers have been intensifying efforts to fast-track networking technologies designed to potentially counter or destroy a North Korean ground invasion – by better enabling soldiers to operate underground in tunnel complexes and in dense urban environments.

While Army innovators and entities such as the service’s Rapid Equipping Force consistently look to address fast-emerging threat scenarios, the prospect of major ground war on the Korean peninsula has, quite naturally, taken on increased urgency in recent months, service weapons developers told Scout Warrior.

“We have been looking at Korean peninsula ops,” Col. John Lanier Ward, REF Director, told Scout Warrior in an interview.

As might be expected, this threat scenario has a particular impact upon Army units such as the REF – who exist to identify pressing soldier combat needs, quickly create requirements and work closely with industry and Army program developers to identify quick-turn, often interim technologies able to have an immediate impact.

Preparing for tunnel and urban combat against North Korea is, without question, not something to be seen as entirely new or recent. However, while specifics of military options for North Korea are naturally not being discussed by Pentagon war planners, many observers, analysts and experts are talking about various threat contingencies, combat scenarios and military strike possibilities.

“We really focus on the soldier on the ground. Any soldier can come to our website and say ‘I have a problem that I do not have a material solution to,’” Ward said.

There are clearly many facets, nuances and contingencies when it comes to the possibility of land war on the Korean peninsula, not the least of which are regularly echoed concerns that North Korean conventional missiles and artillery would pose a substantial threat to populated areas south of the DMZ. Any kind of ground incursion, with or without the anticipated barrage of conventional missiles, would bring similar threats.

Given this, a point not lost on Army planners and threat assessment professionals is that any assault, defense, weapons system employment or platform utilization would – particularly in today’s technological environment – rely upon necessary networking systems, communication devices and other means of synchronizing force movements and activities. In a networked modern weapons environment, command and control takes on even greater tactical relevance, Ward said, making connectivity in line-of-sight challenged areas a particularly pressing concern.

“As an Army we are becoming mission command and communications based. How do you get weapons systems and coms that can operate underground?” Ward asked.

Of course Army officials did not specifically mention any particular war plans for North Korea, but weapons developers do say there is a fast-increasing need to engineer, harness and deliver communications technologies particularly suited to a modern threat environment.

Fighting land war underground or in compact urban environment is by no means specific to North Korea, however Army officials say that the terrain, geographical layout and urban area on the Korean peninsula would clearly require ground combat forces to pursue extensive underground and urban war missions.

Citing historic instances of underground tunnel warfare such as operations in the Korean War, Vietnam and even Iwo Jima in World War II, Ward referenced Army Chief of Staff Mark Milley’s special teams designed to look toward future threats with a specific mind to the likelihood of an increased need for the Army to operate underground and in condensed urban environments.

The Army’s Rapid Equipping Force is testing a wave relay radio technology that enables soldiers to connect with one another while fighting underground, service officials said.

When in a subterranean environment, line-of-sight radio connectivity and other forms of networking are often compromised. To address the issue, the Army is evaluating a small terrestrial-based ad hoc radio that uses frequency modulation, Rapid Equipping Force developers explained.

Ward cited some specific combat scenarios wherein tactics and technologies used in underground combat would need to be much different than those used above ground.

“If I am breaching something above ground, I will use C4. Underground, I may not want to subject my people to overblast,” Ward said.

An emerging networked system relies upon a MPU5 Mobile Ad Hock Networking unit using a small puck engineered with a WiFi repeater that can function like a relay radio. It is designed to connect maneuvering soldiers to an aboveground commander who can track their movements and activity.

REF officials say It is battery operated and kept on the ground. It uses bright LED lights with an adhesive on it as part of a visual augmentation piece, an REF developer told Warrior.

The small puck works in tandem with an electronic warlock personal tracker device attached to a soldier’s boot. As long as there is a line-of-sight connectivity from the puck to a node on the network, it functions as a key relay to connect soldiers in tunnels with soldiers aboveground, REF developers said.

Bluetooth wireless technology tracks soldiers’ distance, sending a signal through radios to the end user device. This creates a mesh network with multiple radios functioning as nodes on a larger communications system.

The ad hoc wireless network is intended to work in tandem with image-intensifying infrared night vision technology able to function without external illumination of any kind,  REF officials said.