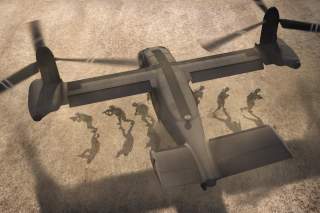 Bell Helicopter’s advanced V-280 Valor tiltrotor prototype, developed to replace the iconic AH-64 Apache attack chopper and UH-60 Black Hawk utility copter in the Army’s fleet of rotary aircraft, is “100%” complete and ready for its maiden flight before the end of 2017, the company announced on Sept. 6.

The Valor was first unveiled by Bell and partner Lockheed Martin at the 2016 Farnborough International Airshow after the company was selected in 2014 to develop an aircraft Army’s Joint Multi-Role Technology Demonstrator, the program that will eventually feed into the Department of Defense’s broad Future Vertical Lift program. If deemed suitable for the Army’s needs, the V-280 is expected to offer a major upgrade to the branch’s rotary aircraft fleet.

According to Popular Mechanics, the Valor is capable of hauling 23% more troops and 25% more cargo at 280 knots per hour, flying twice as fast and operating at twice the range than the versatile UH-60 Black Hawk, which has been a staple of Army operations for the last four decades. Designed as a “clean sheet” tiltrotor that incorporates the unique capabilities of Bell’s V-22 Osprey, the aircraft reportedly integrates new countermeasures and redundancies meant to improve versatility and durability during ground maneuvers.

While the Valor faces stiff competition from the SB-1 Defiant developed by Sikorsky and Boeing for the Joint Multi-Role demonstrator, it remains an appealing option for  a DoD urgently striving to replace its aging Black Hawk fleet. As of Sept. 3, Army Safety Center data indicated that the branch had experienced an average of 131 total aviation mishaps (and 23 Class A mishaps that result in fatalities or significant damage) since fiscal year 2014.

And though this alarming mishap rate is often attributed to military-wide flight readiness issues, Black Hawk variants in August 2017 alone experienced separate aviation mishaps in Afghanistan’s Nangarhar province, off the coast of Hawaii, and off the coast of Yemen. Despite worries about a pilot shortage and experience deficit detailed in a Pentagon Inspector General audit of Black Hawk training and airframe evaluations released in July, the DoD emphasized that Army Aviation and Missile Command “did not effectively manage airframe condition evaluations for the UH-60 fleet,” so far that 25% of the branch’s 2,098 Black Hawks skipped mandatory safety inspections between March 2016 and February 2017.

The Valor may appear especially attractive to the Army given, according to Bloomberg, the V-22 Osprey’s recent success as a reliable workhorse for the Marine Corps that’s been battling its own aviation mishap crisis in recent years. Indeed, the tiltrotor design has appealed to military planners as a next-generation approach to marrying the maneuverability of a helicopter with the range and speed of a fixed-wing aircraft. Despite several fatal accidents early in the Osprey’s development, experts suggest that the aircraft has a more impressive safety record than other experimental aircraft developed in the last decade.

“Compared to the number of helicopters lost, there have been relatively few Osprey accidents,” Richard Whittle, longtime defense reporter and author of The Dream Machine: The Untold History of the Notorious V-22 Osprey, told the Portland Press-Herald in August. “It had an ugly-duckling development, but really for the past decade it has been a bit of swan.”

The Valor is set to undergo an initial ground test at the company’s assembly center in Amarillo, Texas, this fall, according to Bell. The Army plans on evaluating proposals in 2019 before selecting a final replacement — and if the DoD IG report on the Black Hawk is any indication, that selection can’t come soon enough.