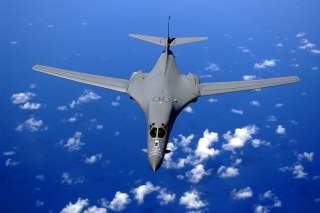 The U.S. recently tested a new long-range anti-ship missile that is designed to counter the growing anti-access/area denial (A2/AD) capabilities of states like China and Iran.

On Monday, the U.S. announced that the Navy, Air Force and DARPA conducted a successful test of their Long Range Anti-Ship Missile (LRASM) earlier this month at the Sea Test Range in Point Mugu, California. According to the press release, during the test: “a B-1B bomber released the LRASM prototype, which navigated a series of pre-planned waypoints to verify aerodynamic performance. In the final portion of the flight, the missile detected, tracked and avoided an object that was deliberately placed in the flight pattern to demonstrate LRASM’s obstacle-avoidance algorithms.”

In the press release, Capt. Jaime Engdahl, the Navy program manager in the LRASM Deployment Office (LDO), said that the missile will “deliver game-changing capability to our warfighters in theater as quickly as possible.”

The LRASM, which is manufactured by Lockheed Martin, has a reported range of 500 nautical miles and carries a 1,000-lb. penetrator and blast-fragmentation warhead. It is primarily designed to provide the U.S. Navy and Air Force with a precision-guided long-range stand-off capability that can survive in aggressive electronic warfare environments. To achieve this, it uses on-board sensors and a semi-autonomous guidance system to reduce its dependence on intelligence, surveillance and reconnaissance (ISR) platforms, network links and GPS navigation. It also employs “innovative terminal survivability approaches and precision lethality” to avoid advanced enemy countermeasures while still reaching its intended target.

(Recommended: 6th Generation Fighter Jets Will Be Slow and Unstealthy)

The missile’s development underscores the degree to which the U.S. military is planning on fighting in contested electronic warfare environments in the future, as well as how far America’s current anti-ship capabilities have eroded. The program was begun under DARPA in 2009 and leverages existing technology of the Joint Air-to-Surface Standoff Missile Extended Range (JASSM-ER) program. Its development is being fast tracked under the Pentagon Better Buying Power 3.0 program with the expectation that it will serve as a stopgap solution to compensate for the Navy’s aging RGM’s Harpoon anti-ship missiles (The U.S. Navy also recently tested a sea-based Tomahawk land attack missile against a moving maritime target. The TLAM, however, requires in-flight communication updates to adjust its flight path. It does boast nearly twice the range of the LRASM).

The LRASM is expected to become operational in 2018 when it is integrated on to the Air Force’s B-1 Lancer. Shortly thereafter, it will be integrated on to the Navy’s F/A-18 Super Hornet. Last year, DARPA began the competition for its successor, the Offensive Anti-Surface Warfare (OASuW)/Increment 2 anti-ship missile, which is expected to reach initial operational capability around 2024.

The LRASM had previously been tested twice in 2013 when it still a DARPA demonstration program. Following those successful tests, the U.S. Air Force and Navy joined DARPA in spearheading the program under the LRASM Deployment Office (LDO). This month was the first time the LRASM had been tested since that office was established. This also appears to be the first time ts obstacle-avoidance capabilities were tested.