The U.S. Marines Have a Big Problem with Their New Amphibious Combat Vehicle 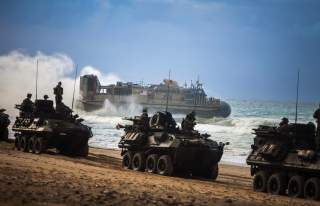 Now that the Marine Corps is about to get its first new amphibious vehicle in forty-five years, it’s discovered a problem.

The Amphibious Combat Vehicle, or ACV, can’t sail quickly to distant locations, nor can it swim through rough waters. So the Marines want a fast, long-range robot barge to carry the ACV from ship to shore.

The problem with the $6.2 billion ACV program, now in the prototype stage, is that due to “the limitations of the ACV 1.1 in open water, it will not be able to transit long ranges at high speeds as desired by the USMC,” according to a new Navy Small Business Innovation Research solicitation.

The range issue is important. In 2014, several retired Marine officers complained that because of the proliferation of antiship missiles, Navy transports would need to remain one hundred miles from hostile shores. The ACV has a sea range of twelve miles.

One solution is to carry the ACV to shore on a “connector,” such as a Landing Craft Air Cushion (LCAC) or Landing Craft Utility (LCU). However, the “LCACs and LCUs are expensive platforms that use significant amounts of fuel, are limited in quantity to the Marine Expeditionary Unit (MEU), and do not provide the organic survivability to be used as an initial assault in a contested environment,” the Navy noted.

So instead the Marines want an “autonomous sled” that can transport an ACV from ship to shore. The sled would travel at least twenty-five knots per hour, have enough fuel to conduct a 130-mile round trip from ship to shore and back, and operate in waters up to Sea State 4 (four-foot waves) while—good news for seasick grunts—providing a “safe and comfortable ride” for the Marines sitting in the ACV.

The sled would actually be a semi-robot: it would be under manual control of the Marines aboard the ACV until the vehicle is dropped off, at which point the sled would autonomously return to the mother ship.

While the ACV is still in the prototype stage, the Navy’s Office of Naval Research estimates the sled will need to accommodate a vehicle of sixty-five thousand pounds gross weight, thirty feet long, twelve feet wide and nine feet high. That would make it a bit larger than the Marine Corps’ current twenty-five-ton, twenty-six-foot-long AAV-7 (though the ACV would be shorter than the eleven-foot-high AAV-7). With space aboard amphibious assault ships at a premium, the Navy wants a space-saver sled design that doesn’t “require long term berthing in a well deck during transit. This may include modular, transformable, or inflatable structures that can be stored and/or stacked at reduced footprints in other spaces aboard amphibious ships or other platforms that do not have a well deck.”

Phase I of the project calls for contractors to submit conceptual designs. Phase II will use a scale model to test hydrodynamic performance, propulsion and drag, as well as the autonomous control system. Phase III will see a full-sized prototype.

As for the ACV itself, the Marine Corps is currently evaluating prototypes from defense contractors BAE and SAIC. The wheeled ACV will replace the tracked AAV-7 Assault Amphibious Vehicle, which has been in service since 1972.