The U.S. Marines Might Have Found a Secret Weapon (That It Had All Along) 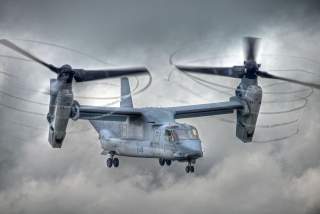 Bell-Boeing designed a special pylon on the side of the aircraft to ensure common weapons carriage. The Corps is now analyzing potential requirements for weapons on the Osprey, considering questions such as the needed stand-off distance and level of lethality.
"We did a demonstration with Bell where we took some rockets and we put them on a pylon on the airplane using APKWS. We also did some 2.75 guided rockets, laser guided weapons and the griffin missile. We flew laser designators to laser-designate targets to prove you could do it," Rick Lemaster - Director of Business Development, Bell-Boeing, told Scout Warrior in an interview.
Lemaster also added that the Corps could also arm the MV-22 with .50-cal or 7.62mm guns.
New Osprey Variant in 2030

Corps officials said th idea with the new Osprey variant is to build upon the lift, speed and versatility of the aircraft’s tiltrotor technology and give the platform more performance characteristics in the future. While few specifics were yet available -- this will likely include improved sensors, mapping and digital connectivity, even greater speed and hover ability, better cargo and payload capacity, next-generation avionics and new survivability systems such as defenses against incoming missiles and small arms fire.

he Bell V-280 offering is similar to the Osprey in that it is a tiltrotor aircraft.

The Corps is also developing technology to better network Osprey aircraft through an effort called “Digital Interoperability,” or DI. This networks Osprey crews such that Marines riding in the back can have access to relevant tactical and strategic information while in route to a destination.  DI is now being utilized by the 15th Marine Expeditionary Unit and is slated to be operational by 2017.