The U.S. Military Is Arming To the Teeth with Lasers and Missiles Because of One Reason 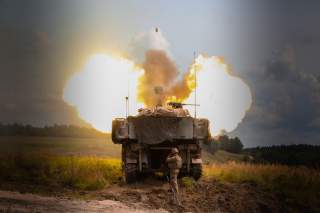 The US Army is accelerating a number of emerging counter-drone weapons in response to a warzone request from US Central Command - to counter  a massive uptick in enemy small-drone attacks in Iraq and Afghanistan.

"Theater has asked for a solution, so we are looking at what we can apply as an interim solution," Col. John Lanier Ward, Director Army Rapid Equipping Force, told Scout Warrior in an interview.

New electronic warfare weapons, next-generation sensors and interceptors and cutting edge improved targeting technology for the .50-Cal machine gun to better enable it to target enemy drones with more precision and effectiveness -- are all key approaches now being pursued.

"Targeting is getting better for the .50-Cal...everything from being able to detect, identify and engage precise targets such as enemy drones," Ward added.

In service for decades, the .50-Cal has naturally been thought of as largely an area weapon able to lay down suppressive fire, enabling troops to manuever and blanketing enemy targets with rounds. The weapon of course still has this function, which could seek to eliminate attacking drones. At the same time, technical efforts are underway to make .50-Cal targeting more precise, such that it could shoot down swarms of quadcopters or other commercially avail mini-drones configured for attack.

Precision-guided weaponry, such as JDAMs from the air, have been operational for decades. GPS-guided land weapons such as Excalibur 155m artillery rounds or the larger GMLRS, Guided Multiple-Launch Rocket Systems, have been in combat since 2007 and 2008; engineering comparable guidance for smaller rounds, naturally, is a much more challenging task.

Non-Kinetic EW approaches have already been used effectively to jam signals of ISIS drones by the Army and Air Force; Ward explained that these tactics would be supplemented by emerging kinetic options as well.

Various technical efforts to engineer precision guidance for the .50-Cal have been in development for several years. In 2015, a DARPA program called Accuracy Tasked Ordnance (EXACTO) demonstrated  self-steering bullets to increase hit rates for difficult, long-distance shots. DARPA's webiste, which includes a video of a live-fire demonstration of the technology, states that EXACTO rounds maneuver in flight to hit targets that are moving and accelerating. "EXACTO’s specially designed ammunition and real-time optical guidance system help track and direct projectiles to their targets by compensating for weather, wind, target movement and other factors that can impede successful hits," DARPA.mil states Laser rangefinding technology is a key element of EXACTO in order to accommodate for fast-changing factors such as wind and target movement; since the speed of light is a known entity, and the time of travel of a round can also be determined, a computer algorithm can then determine the exact distance of a target and guide rounds precisely to a target.

Elements of the fast-tracked counter-drone effort, with respect to forward base protection, involves collaboration between the Army's Rapid Equipping Force and the service's program of record Forward Operating Base protective weapon -Counter-Rocket Artillery and Mortar (C-RAM).

Also, according to an article in Jane's Defence,  Orbital ATK is developing a range of new advanced medium-calibre ammunition variants drawing upon EXACTO-like technology for use with its 30/40 mm calibre MK44 XM813 and 30 mm calibre lightweight XM914 Bushmaster Chain Guns.

From Janes Defence: "The EXACTO effort has resulted in a guided .50 calibre round – equipped with real-time optical sensors and aero-actuation controls – that improves sniping performance in long-range, day/night engagements. The EXACTO system combines a manoeuvrable bullet with a complementary laser designator-equipped fire-control system (FCS) to compensate for weather, wind, target movement, and other factors that can reduce accuracy."

CRAMis deployed at numerous Forward Operating Bases throughout Iraq and Afghanistan and the system has been credited with saving thousands of soldiers’ lives and is now being analyzed for upgrades and improvements.

C-RAM uses sensors, radar and fire-control technology alongside a vehicle or ground-mounted 20mm Phalanx Close-in-Weapons-System able to fire 4,500 rounds per minute. The idea is to blanket an area with large numbers of small projectiles to intercept and destroy incoming artillery, rocket or mortar fire. As an area weapon, the Phalanx then fires thousands of projectiles in rapid succession to knock the threat out of the sky.

Engineers with Northrop Grumman integrate the Raytheon-built Phalanx into the C-RAM system; C-RAM was first developed and deployed to defend Navy ships at sea, however a fast-emerging need to protect soldiers on the ground in Iraq and Afghanistan inspired the Army to quickly adapt the technology for use on land; C-RAM has been operational on the ground since 2005.

Northrop developers are assessing new optical sensors, passive sensors and lasers to widen the target envelope for the system such that it can destroy enemy drones, helicopters, fixed-wing aircraft and cruise missiles. Engineers are also looking at new interceptor missiles to compliment the Phalanx, Northrop developers said.

The basis for integrating emerging technologies is grounded in a technical effort to construct the system with “open architecture” and workable interfaces able to accommodate new sensors and weapons. This hinges on the use of common IP protocol standards engineered to facilitate interoperability between emerging technologies and existing systems.

“Regardless of what is used to defeat the threat, we are looking at changing the sensors as technology evolves. You can also integrate new weapons as technology changes. In the future, we plan to have weapons talk to the interceptor,” said Sean Walsh, C-RAM project management, Northrop.

The rationale for these potential upgrades and improvements is grounded in the recognition of a fast-changing global threat environment. Drone technology and drone-fired weapons, for instance, are proliferating around the globe at a rapid pace – therefore increasing the likelihood that potential adversaries will be able to surveil and attack forward operating bases with a wider range of air and ground weapons, including drones.  Army base protections will need to identify a larger range of enemy attack weapons at further distances, requiring a broader base of defensive sensors and weaponry.

“There is some work being done to add missiles to the system through an enterprise approach,” Walsh said.

Other interceptor weapons are now being developed for an emerging Army ground-based protective technology called Indirect Fire Protection Capability, or IFPC Increment 2. Through this program, the Army plans to fire lasers to protect forward bases by 2023, senior service leaders say.

Army weapons testers have already fired larger interceptors and destroyed drones with Hellfire missiles, AIM-9X Sidewinder weapons and an emerging kinetic energy interceptor called Miniature-Hit-to-Kill missile. The AIM-9X Sidewinder missile and the AGM-114 Hellfire missile are typically fired from the air. The AIM-9X is primarily and air-to-air weapon and the Hellfire is known for its air-to-ground attack ability.

Made by Lockheed Martin, the Miniature Hit-to-Kill interceptor is less than 2.5 feet in length and weighs about 5 pounds at launch. It is designed to be small in size while retaining the range and lethality desired in a counter-RAM solution. As a kinetic energy interceptor destroying targets through a high-speed collision without explosives, the weapon is able to greatly reduce collateral damage often caused by the blast-fragmentation from explosions.

The Army has been testing many of these weapons using a Multi-Mission Launcher, or MML -- a truck-mounted weapon used as part of Integrated Fire Protection Capability - Inc. 2; the system uses a Northrop-developed command and control system called Integrated Air and Missile Defense Battle Command System, or IBCS.

IBCS uses a netted-group of integrated sensors and networking technologies to connect radar systems -- such as the Sentinel -- with fire-control for large interceptors such as Patriot Advanced Capability – 3 and Terminal High Altitude Area Defense.“If I lay down my sensors, I can see any kind of attack coming from those origins to take kill vectors as far forward as possible. If an enemy has a cruise missile, I want to kill them over the top of the enemy,” said Kenneth Todorov, Director, Global Air and Missile Defense, Northrop Grumman.

With IBCS, sensors can be strategically placed around a given threat area or battlespace to optimize their detection capacity; IBCS is evolving more toward what Pentagon strategists called “multi-domain” warfare, meaning sensors from different services can interoperate with one another and pass along target information.