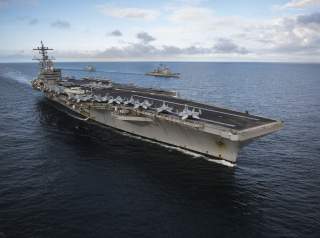 Will American soldiers be protected someday by “deflector shields” that block laser weapons?

The answer is yes, say scientists at a British defense contractor, who predict that within fifty years, the military will create a sort of optical lens out of thin air that will protect friendly troops while enabling users to spy on enemy forces from great distances.

Researchers at defense giant BAE Systems calls the concept a Laser Developed Atmospheric Lens (LDAL). The idea is to aim a powerful high-pulsed power laser system at a section of Earth’s atmosphere, which will be temporarily ionized into a sort of virtual mirror or lens.

The concept “copies two existing effects in nature; the reflective properties of the ionosphere and desert mirages,” according to a BAE announcement. “The ionosphere occurs at a very high altitude and is a naturally occurring layer of the Earth’s atmosphere which can be reflective to radio waves – for example it results in listeners being able to tune in to radio stations that are many thousands of miles away. The radio signals bounce off the ionosphere allowing them to travel very long distances through the air and over the Earth’s surface. The desert mirage provides the illusion of a distant lake in the hot desert. This is because the light from the blue sky is ‘bent’ or refracted by the hot air near the surface and into the vision of the person looking into the distance."

By artificially creating these phenomena, and taking advantage of the Kerr effect (which changes the refractiveness of materials), “mirrors, glass lenses, and structures like Fresnel zone plates could all be replicated using the atmosphere, allowing the physics of refraction, reflection, and diffraction to be exploited,” BAE says.

An artist’s depiction that accompanied the BAE news release showed what looked like a high-altitude aircraft focusing a green cone of light on the atmosphere below.

However, before anyone starts counting on atmospheric sky shields and virtual telescopes, keep in mind that BAE is speaking of the technology being fielded by around 2057. This suggests that some other technological breakthroughs will be needed to make the concept a reality.

In fact, is the technology even feasible? I checked with Dennis Killinger, a professor emeritus of physics at the University of South Florida. “I believe it is scientifically sound but will have to be developed more to see how well it works in practice,” he told me in an email.

“It is basically using a high power laser (with the proper wavelength and beam characteristics) to induce a lens or mirror like region in the atmosphere at a remote distance from the laser system,” Killinger wrote. “They call it ‘Laser Developed Atmospheric Lens’, but I would also call it ‘Laser Remote Generation of Atmospheric Lenses’.  They use a high-power laser beam and focus it at a distant region of the atmosphere, and the laser then heats up or ionizes the small region of the atmosphere.  This heated region then acts like a semitransparent-lens or mirror in much the same way that heated air over a parking lot produces distortions of an optical image or light that passes through it (i.e.,  a mirage effect)."

“The practicality of the system will be determined on how well the semi-lens/mirror or optical effect is made and controlled, and how efficient it is in acting as a lens or mirror,” Killinger adds.

However, the most significant advantage of LDAL may be the boost to intelligence and surveillance capabilities. The ability to spy on distant adversaries through a sort of virtual super-telescope would be of incalculable value. Instead of risking spy planes or human spies in North Korea, or relying on periodic observation by orbital satellites, perhaps an analyst in Japan or Nevada could watch for hostile activity from the safety of his cubicle.

Of course, if we can spy on them, then they can spy on us. Privacy has already become a rare commodity, and it’s about to become even rarer.

This appeared earlier this year.