The U.S. Military Feared a Russian Nuclear Strike Could Have Cut off Its Nuclear Submarines 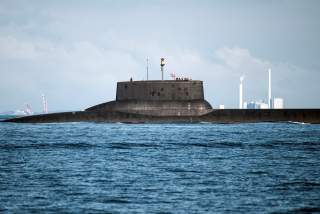 A key component of the U.S. doctrine of mutually assured destruction — commonly and appropriately known as MAD — was that American troops would still be able to retaliate if the Soviet Union launched a nuclear attack. But for a time, the Pentagon was seriously worried that its own nuclear missile submarines wouldn’t get those orders in time.

In 1968, the Defense Intelligence Agency’s Scientific Advisory Committee found dangerous gaps in the communications network supporting the nation’s so-called Fleet Ballistic Missile boats, or FBMs. The FBM fleet included more than 40 submarines of five different classes all capable of carrying up to 16 Polaris nuclear-tipped ballistic missiles, collectively known as the “41 for Freedom.”

The agency included the report in a response to a private individual’s Freedom of Information Act request. The website GovernmentAttic.org published the collection of documents totaling more than 1,000 pages.

Despite being heavily redacted, the report offers a candid and worrisome assessment of one of Washington’s key nuclear deterrents during the Cold War:

1. The Polaris weapon system may be targeted against time-urgent or assured destruction targets. In the first case, the message to fire must be received [redacted] whereas in the second case a delay [redacted] may be acceptable to allow reliable transmission of the “go” message. Primary reliance for communication of this message to the Polaris submarines is placed [redacted.] Backup is provided by [redacted] as well as by other transmitters [redacted.]

2. When the Polaris weapon system is targeted against time urgent targets, very severe constraints are imposed on the deployment and the command and control doctrine for the system. The Soviet capability for [redacted] a most serious threat to the Polaris command and control system under these constraints. Therefore, it is the opinion of the DIA/SAC that the U.S. cannot depend with high confidence in the present situation on the Polaris weapon system to strike time-urgent targets. On the other hand, the capability of the Polaris system for assured destruction, i.e., for attack of non-time urgent targets, is high.

To be ready to send out urgent messages at a moment's notice, the Pentagon would apparently have to keep significant resources on call at the communication centers. “This is inherently expensive and is not current practice,” DIA noted.

And while the scientific advisers said Polaris could still be an important part of any nuclear war, they recommended the Pentagon start work on an improved and standardized communications arrangement as soon as possible:

7. In view of the difficulty the Soviets would have in maintaining [redacted] for a long period and the opportunity we would have to use redundant communication links and tactics, it is our opinion that the “go” message could ultimately be received to allow the Polaris weapon system to fulfill its assured destruction role provided appropriate procedures for wartime operating conditions exist. To insure that the message ultimately reaches the Polaris submarines, it is imperative that a communication network be established, with the technical and operational characteristics to permit the use of alternate paths in the presence of enemy action.

A plan for such a network, MEECN (Minimum Essential Emergency Communications Net), is in its formative stages in the [Joint Chiefs of Staff]. However the MEECN does not exist today as an operational command and control network nor has a plan been approved yet to meet command and control or [redacted.] A serious deficiency in applying a variety of alternative communication links to transmission of the message from NCA (National Command Authority) to the Polaris weapon system is the lack of commonality or significant compatibility among the present terminals, as for example between the [redacted.]

Today, the U.S. Navy flies a number of E-6B Mercury planes as part of its Take Charge and Move Out system, or TACAMO. Based on the Boeing 707 airliner, the aircraft would help make sure the “go” codes got to the sailing branch’s nuclear missile boats in a crisis.

But since TACAMO has been around since the early 1960s, the Pentagon likely put other, still classified measures into place after reading the results of the DIA study.