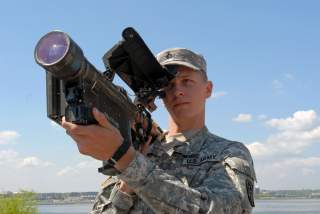 On a single charge from a standard 220V wall outlet, Raytheon’s High Energy Laser (HEL), guided by a sophisticated targeting system, can scan for enemy drones for four hours and fire up to thirty shots.

The whole system is mounted on a rugged Polaris MRZR, a small all-terrain vehicle, making it ideal for protecting convoys and forward operating bases.

“Basically, we’re putting a laser on a dune buggy to knock drones out of the sky,” as summed up by Dr. Ben Allison, director of high energy lasers at Raytheon.

With devastating effect, ISIS has rigged store-bought drones to drop grenades and serve as kamikaze bombers strapped with RPG warheads. In Iraq, more than a dozen have been killed and over fifty injured by these makeshift weapons.

To defend against this growing threat, the Pentagon is investing $332.2 million to rapidly field and deploy counterdrone technologies to troops downrange.

Currently, coalition troops in Iraq and Syria have relied on everything from shooting at drones with rifles to launching Patriot missiles, ordinarily used to take down aircraft and ballistic missiles.

After learning that a $3 million Patriot missile was being used to shoot down a $200 store-bought quadcopter, Raytheon’s CEO and Chairman Tom Kennedy and Dr. Allison were inspired to create a more cost-effective solution.

“So, the question became, ‘What can we do for a counter-UAS system using a high-energy laser, and do it quickly,’” Dr. Allison said. “We wanted to take the assets and capabilities Raytheon has today and use them to really affect this asymmetrical threat.”

Raytheon initially explored placing the laser on a standard-size military container, but engineers quickly realized that the system only occupied a quarter of the space and was highly portable.

The key to the system’s size is its MTS sensor, which serves as the laser’s beam director and guidance system, detecting and tracking targets.

“If you have a good beam director, then you can use a smaller, more efficient laser. You can make your system smaller and more flexible,” explained Dr. Allison.

Once the laser’s designers saw how small the system was, they immediately began exploring how to mount it on a vehicle so it could be deployed to remote forward operating bases where the need is greatest.

"Right now, it's a shoot-on-the-halt capability. You drive the vehicle wherever you're going to drive it. You stop, and then you fire up the laser,” said Art Morrish, Raytheon’s vice president of Advanced Concepts and Technology.

"That makes it great for protecting forward operating bases and places where convoys have to stop. The next step is to set it up so you can actually shoot on the move,” Morrish added.

The system has a range of 5,000 meters and can be operated on a single charge for several hours. When coupled with a generator, the laser can essentially be fired an infinite number of times.

This ability to fire repeatedly and take down multiple drones could be critical in future conflicts. Analysts fear that enemy forces could begin using swarms of small drones.

“These [drones] are really small and hard to detect, and if they swarm in groups, they can overload our ability to knock them all down,” said J. D. Johnson, the head of Raytheon’s army programs and a retired army general. “The threat is very resilient and well-resourced, and we have to be looking one or two moves ahead to defeat it.”

Earlier this year, in what is believed to be the first-ever drone swarm attack, thirteen home-made drones simultaneously descended upon two Russian bases in Syria.

Pentagon officials fear that this threat will soon present itself in future conflicts around the world.

“This isn’t just an Iraq and Syria problem; it’s a regional and global problem,” said U.S. Army Lt. Gen. Michael Shields, who is helping to lead the army’s efforts to counter drones.”