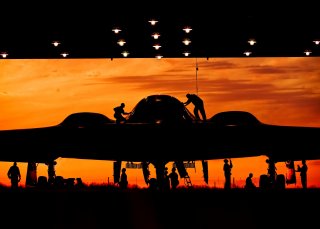 In a more peaceful universe, the fact that the United States possesses almost 4,000 weapons that can destroy entire cities would be horrifying.

But in our universe, it is actually an encouraging sign of how much America's nuclear arsenal has declined since the Cold War.

The figures show just how deep America's nuclear arsenal has been cut since the height of the Cold War. In 1962, the year of the Cuban Missile Crisis, the United States had 25,540 nuclear weapons. That number grew to a peak of 31,255 nuclear weapons in 1967.

The Federation of American Scientists put the total number of U.S. nuclear weapons as of January 2017 at about 6,800, of which about 4,000 are active. The active stockpile included 1,367 deployed strategic warheads, 2,471 nondeployed warheads and around 200 deployed tactical warheads.

As a footnote, there are an estimated 14,200 nuclear weapons in the world, according to the Federation of American Scientists. Russia has the largest number at 6,600 active and retired warheads, just slightly larger than the American total. The rest of the world (France, China, Britain, Pakistan, India, Israel and North Korea) have a little over a thousand.

As Winston Churchill said, "If you go on with this nuclear arms race, all you are going to do is make the rubble bounce.