The U.S. Military Needs GPS to Fight. That Needs to Change. 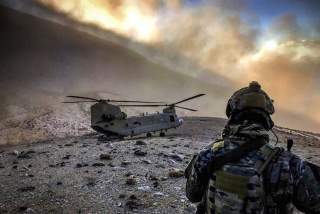 Global navigation satellite systems (GNSS), specifically satellite-based position, navigation and timing (PNT) constellations have been available for decades. The U.S. Department of Defense (DoD) started fielding the first GNSS, Global Positioning System (GPS), in 1973 to facilitate precision guidance for targeting and delivery of munitions. GPS has since moved well beyond military use, becoming a ubiquitous part of the global environment. Governments, people, economies, and infrastructures are all fully intertwined with satellite PNT. At the same time, military, economic, and scientific experts are aware of the Achilles Heel that will always plague the system – simple interference through jamming, spoofing or meaconing. Is it time for another navigation option?

Looking back at the birth of GPS one can see why DoD decided to build a multi-billion-dollar satellite network. Prior to GPS, there were limited supplements to basic navigation (terrain association and dead reckoning). Remote radio-based navigational aids (NAVAIDS) assisted in location awareness and tracking while onboard systems such as Doppler radar monitored speed over ground and inertial navigation units (INU) (inertial measuring units (IMUs) including computer processing) maintained limited position awareness primarily for targeting. NAVAIDS faced limitations due to line-of-sight, security, maintenance, and power requirements. Doppler and INUs were limited in their ability to remain accurate over time and distance. The systems were not able to provide continuously accurate position information without significant human oversight. Satellite-based navigation assistance delivered a superior solution as receivers could maintain accurate position needing little human interaction. Furthermore, GPS had virtually none of the drawbacks of the land-based NAVAIDS or INUs. The only perceived limitation to GPS was the cost ($12 billion plus $950 million/year), which DoD willingly absorbed as the best solution at the time.

New technologies often present unanticipated issues. Some are easily remedied, while others can be fatal. It took little effort for adversaries and electronic enthusiasts to develop ways to interfere with GPS. Today GPS can be easily jammed due to the low power signal. It can be spoofed (satellite impersonation) and meaconed (interception and rebroadcast of navigation signals) resulting in a misperception of position unbeknownst to the INU or operator. GPS flaws may be mitigated and even eliminated as they are identified, but there will always be an opportunity for interference when the navigational source is not co-located with the system or human moving through the environment.

The weakness of GPS provides an opportunity to consider alternative navigation solutions. Advances in computer hardware, video processing, software algorithms, databasing, and sensor multi-tasking have made autonomous computer navigation a feasible solution. Navigation computers can use sensors to look at the environment and orient much as humans have done for centuries through terrain association. Unlike a human, the computer will not become distracted or complacent in its navigation and position awareness tasks. The key lies in robust computers and full motion video navigation algorithms coupled with efficient storage and retrieval of Digital Terrain Elevation Data (DTED) and multispectral maps of the earth and stars. All the aforementioned are significantly more advanced today than they were in the 70s and 80s during the birth of GPS.

Research conducted by MIT, UC Berkley, and University of New South Wales, among others, has demonstrated the efficacy of visually updated inertial navigation and state estimation for Unmanned Aerial Vehicles (UAV). Results indicate that sensors (visual, thermal, laser, radio) can provide credible navigation inputs to an INU facilitating autonomous navigation in degraded GPS environments like subsurface (sea and tunnel), indoors or off-world unmapped environments. The next step is to integrate more diverse databases and allow a navigation computer to maintain position awareness on a large scale. Based on the rate of progress, an effective visual navigation system should be ready for commercial production within the next few years.

Transition to autonomous computer navigation will be a relatively simple upgrade to most combat systems. Many sea, land, air, and space vehicles have various multispectral sensors installed. These systems will provide background images viewed during normal operation for analysis. Furthermore, a navigation computer for continuous position awareness could task unused sensors. Equipment associated with vehicle survivability including radio, infrared, and visual sensors may be dual-tasked to stare at the environment providing navigational data. This process would only require the addition of a dedicated navigation computer with appropriate databases and software to leverage available sensors.

The U.S. Army can easily shift to autonomous navigation as it primarily operates on or very close to the earth. The visual navigation computer can be integrated with sensors and navigation equipment via the existing databus structure, limiting the need to rewire, reducing installation times. Those elements lacking built-in sensors could be equipped with small mountable sensors connected to hardened smartphones and software. These commercial devices already contain the necessary hardware to conduct autonomous navigation using their onboard cameras, barometers, and accelerometers. The U.S. Navy, Air Force, Marines and Coast Guard should also transition; however, they will need celestial databases for ships and medium to high altitude aircraft. Once the capability is ready for fielding, the transition can be rapidly accomplished in the same way DoD has applied upgrades to other systems.

The global economy and infrastructure present the greatest challenges to our divesting of GPS. Commercial and governmental systems rely heavily on the precision timing provided by GPS satellites. Although the need for such accuracy is worthy of debate, the ubiquity of free GPS time makes economic sense to those needing a common worldwide timing solution. Therefore, shutting down GPS too quickly would cause significant problems. Given adequate transition time, there are six additional GNSS constellations among other systems in orbit that can provide time. This supports a progressive move to GNSS PNT delivered by the European Union and their Galileo system until we can shift the global community to other effective methods and sources for timing (and position & navigation).

The monetary cost of transition to autonomous navigation will be far less than the current and projected expenditures for GPS. The price tag of GPS Block III & the Next Generation Operation Control Segment is $10 billion and growing. The annual maintenance expenses for the current GPS configuration are rapidly approaching $1 billion. For autonomous navigation, a high estimate of $8,000 (dismount) to $130,000 (aviation) means DoD could acquire nearly 950,000 units for the $10 billion in projected GPS upgrades. Furthermore, fielding autonomous navigation would negate the requirement to buy new GPS III (M-Code) capable receivers and recover billions through the elimination of annual maintenance costs, all while fielding a more secure position and navigation solution.

Continued dependence on global navigation satellite system(s) will only guarantee further interference resulting in lost military and civilian ships, planes, vehicles, people, and money. We can continue applying status quo mitigating solutions to the GNSS or we can move toward systems that require no external sources or connections to maintain position awareness. The technology is maturing rapidly, yet the private sector has a limited will to move beyond GPS. Therefore YES, it is time for the ARMY and DoD to LEAD the world beyond satellite PNT dependency.

CW5 Matt Sivacek is an AH-64D Instructor Pilot currently serving as a Fellow with the Army Future Studies Group. Any personal opinions, conclusions, and recommendations expressed or implied above are those of the author and do not reflect the views of the AFSG or any entity of the U.S. government.