The U.S. Military Needs "Second Strike Capability" in the Space and Cyber Arenas 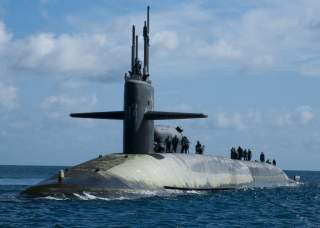 The United States must develop some form of “second strike capability” in domains such as space or cyber to help deter aggression in those arenas. The development of ballistic missile submarines helped to slow down nuclear escalation during the Cold War. The development of some sort of equivalent capability for realms such as cyber or space might do the same for those domains too.

“The deterrent mix of the five spices must be carefully thought out,” Richardson said, speaking at the Center for Strategic and International Studies on May 25. “It might be that a simple, you know, like-on-like approach is appropriate. But, you know, a more sophisticated approach would include the other modes, other dimensions of deterrence, perhaps responding through other means when required. It would be tailored to specific actors, but at the same time we’ve got to be mindful that the whole world is watching, and so it has to hold together across, you know, all situations. Other actors will be watching what we do to one.”

“The one thing about the undersea leg was it gave you that second-strike capability, right, that guaranteed second strike, and that slowed things down a little bit,” Richardson said. “You really had to think things through. It wasn’t just sort of ICBM versus ICBM. That was sort of a high-bandwidth structure, very, very quick decision-making possible. And so, as we think about deterrence, things that slow the process down a little bit, buy us time, seem to be beneficial. And so, you know, is there a way in some of these other dimensions to have something like the SSBN, a – you know, an assured second strike capability in space or an assured second-strike capability in cyber?”

The question, of course, is how would the United States build something that might do that—and that is the question the Navy is trying to answer. The answer could include new technologies, but exactly what is still an open question. “The Defense Department is tackling these challenges this summer in many ways,” Richardson said. The answers won’t come easily, but it is something the  Pentagon must tackle head on.