The U.S. Military Is Not Prepared to Hunt 1,000 North Korean Missiles 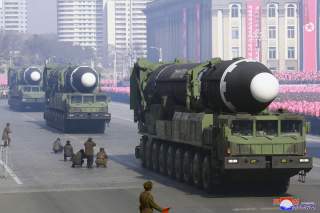 Hunting ballistic-missile launchers would be one of the U.S. military’s most important tasks were hostilities on the Korean peninsula to erupt. Kim Jong Un’s arsenal could cause immense damage to South Korean cities, air bases and American and South Korean troops.

But tracking the launchers from the air and with special operations units on the ground will be an extremely difficult task — with a poor track record. During the 1991 Persian Gulf War, it’s possible the United States’ “Scud hunt” scored hits on Saddam Hussein’s ballistic-missile transporter erector launchers — or TELs. But there is little evidence that the missile hunt significantly reduced Iraq’s ballistic missile arsenal.

Post-war assessments discovered that most of Saddam’s TELs came out of the war intact, although the United States and its allies helped slow the tempo of Iraqi Scud launches during the war, which may have saved lives. That alone was an accomplishment given the coalition’s need to keep Israel — one of Saddam’s targets for his missiles — from striking back and entering the war, which could have alienated America’s Arab allies.

North Korea could likewise choose to strike beyond South Korea. In the Asia-Pacific, Japan takes the threat of a North Korean attack seriously enough to have begun holding missile-attack drills.

Pyongyang regularly tests ballistic missiles, with the most recent test in November 2017 that traveled over Japan to a distance of 590 miles. The last North Korean nuclear test, the country’s sixth, occurred on Sept. 3, 2017 and was a possible 280-kiloton device.

U.S. aerial intelligence, surveillance and reconnaissance (ISR) has certainly improved in the 27 years since the Gulf War. But Saddam’s ballistic missile arsenal only numbered some 400 missiles in 1991 with a few dozen TELs. North Korea could possibly possess more than 1,000 ballistic missiles — including some the United States must assume are capable of carrying working nuclear warheads. Most are short range and aimed at South Korea.

North Korea has also had decades to study U.S. air campaigns elsewhere in the world, and has extensive mountains and tunnels to hide its missiles. A shooting war will therefore involve a foe that is likely better prepared and better armed than any the United States has faced in decades. To make matters worse, the United States will need to first degrade North Korea’s air defenses enough to allow its ISR planes access.

The U.S. Air Force and Navy could likely do this, but with a smaller pool of aircraft than called on during the Gulf War given an ongoing airframe shortage and readiness crisis — although readiness, meaning the ability to get planes in the air, is reportedly higher at U.S. bases in the Pacific.

A low level of readiness in the U.S. military does not mean the Air Force and Navy lack the warplanes for a war in Korea. It does mean the military would have to pull more planes from other areas of operations including the Middle East, where there is a high demand for aircraft, especially those dedicated to surveillance missions.

“For operational security concerns, I can’t go into all of the details of that, but what I would say is the level of readiness that we have attained here at Kadena [Air Base in Okinawa] through the deliberate efforts of our airmen, leave us in a place that we’re very well positioned for any contingency,” U.S. Air Force Brig. Gen. Case Cunningham told Defense News. “So it’s not business as usual, but I feel very confident in our readiness to respond should that call be required.”

The Korean peninsula has also been the sight of major war games such as Vigilant Ace in December 2017, which saw more than 200 American and South Korean planes take part. Vigilant Ace included American F-35 and F-22 stealth fighters, and the U.S. Navy’s EA-18G Growlers designed to knock out air defense systems.

A war, however, would still strain the U.S. military’s logistics — its ability to move troops, supplies, civilians evacuating from the peninsula and the wounded. The U.S. military is already pre-staging extra ammunition in South Korea to prepare for a possible conflict.

But the Pentagon currently does not have the ability to evacuate its own anticipated wounded quickly, according to a highly detailed February 2018 article in the New York Times on the military’s war plans. There is a “limited ability to evacuate injured troops from the Korean Peninsula daily — a problem more acute if the North retaliated with chemical weapons,” the newspaper reported.

Within the opening days of a conflict, the number of wounded U.S. troops could increase to some 10,000, one-third of all American wounded during the Iraq War from 2003 to 2011.