Is the U.S. Military a Paper Tiger? 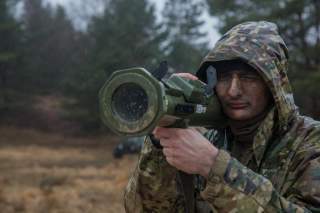 A recent public opinion poll in China shows just how delusional some people can be: Of the almost 1,500 respondents, 87% believed that Beijing already has the military capacity to oust Japan from the Senkaku/Daioyu islands. Nearly as many — 85.6% — feel that China is powerful enough to enforce its claims over the South China Sea.

Moreover, three-quarters of those polled said they believe that China would prevail, even if the United States intervened militarily.

Boy, I’ll have what they’re having.

Interestingly, there are many Americans who believe the same thing. In fact, it is an article of faith among conservatives in the United States that the US military has been starved into near-extinction by reckless actions undertaken by the Obama administration.

One of their favorite mantras has centered on the so-called “hollowing-out” of the military: that irresponsible defense spending cuts have emaciated the military, both in terms of personnel and equipment, and have delayed procurement, maintenance, and training. All this has left the US military too weak to defend the country or its national interests.

US defense spending: Hardly in decline:

There is so much wrong with this argument that it’s hard to know where to begin. First of all, defense spending. Yes, it has gone down – from record highs established by the George W Bush administration, in response to fighting two ground wars simultaneously. In constant 2017 dollars, the US defense budget peaked in 2010 at well over US$700 billion, and it has since dropped to just under US$600 billion.

Firstly, though, much of the increase during the 2000s was due to supplementary war spending because the US was engaged in fighting land wars in Iraq and Afghanistan. Now, the US has largely withdrawn from those conflicts and so these supplementals have dropped accordingly (and, in fact, should be eliminated altogether, if they were not such a convenient slush fund for the Pentagon to secure additional, back-door funding).

Secondly, even at US$600 billion, the US defense budget is currently still higher than it was during the latter years of the Cold War, i.e., the Reagan and Bush I administrations – and few would ever accuse Reagan of being soft on defense.

Of course, the United States still spends as much on its military as the next eight largest defense-spenders combined, and it outspends number two China by a factor of greater than three to one (these figures according to the Stockholm International Peace Research Institute). On the other hand, the US does have a global footprint, which requires a much bigger force capable of projecting power everywhere in the world, and its manpower costs and technology demands also rate a much higher level of spending. That said, it is hard to see the US military “starving” on US$600 billion a year.

But let’s say that the US military is getting smaller and older. That is not necessarily a bad thing or even a novel development. Steven Kosiak (full disclosure: an old friend and colleague back in our days together at the Center for Strategic and Budgetary Assessments), recently put out a report for the Center for a New American Security basically arguing these very points.

In the first place, he writes, there has long been a “persistent trend toward a US military that is smaller, generally equipped with older weapons platforms, and less frequently infused with next-generation weapons systems.” This policy, he argues, goes back decades and it is part of a deliberate strategy of emphasizing quality over – even at the expense of – quantity. Each new generation of weapons system is much more expensive but also much more capable, and rather than give up next-generation effectiveness, the Pentagon has long chosen to have better but fewer weapons systems. This is not an Obama thing, it is an approach of long-standing.

Secondly, Kosiak argues, the US military is not being hollowed out, in terms of monies being spent on operations and support. O&S includes salaries for the military and Defense Department civilians, housing, retirement, healthcare, food, fuel, spare parts, maintenance, etc, etc. Kosiak demonstrates that O&S spending per service member has gone up consistently and significantly over the past 35 years, from US$52,000 in 1980 to US$110,000 in 2016 (as measured in constant 2017 dollars).

Again, Kosiak argues that this part of a deliberate Pentagon strategy of emphasizing quality over quantity. He says that the US Defense Department has “consistently taken the view that maintaining or improving quality is generally more important than sustaining numbers of personnel.”

Kosiak admits that the Pentagon would probably like to have a better and bigger force, but funding for this has rarely ever been so available, even under Reagan. Defense spending is never going to be enough, and so there will always be trade-offs. He argues that “given the choice between a smaller and ready force and a larger but to some extent ‘hollow’ force, few would have chosen the latter.”

The United States still maintains an awe-inspiring military. It possesses 10 aircraft carriers, 68 nuclear-powered submarines, 2,800 tanks, 3,600 tactical aircraft and bombers, and more than 600 UAVs and drones. Can the US military do everything it is called upon to do, simultaneously and in all locales? Probably not, but it still has considerable capacity to concentrate formidable – and likely prevailing force – when and where it wants to. No one should underestimate this, not in Washington, and certainly not in Beijing.

Richard A Bitzinger is a Senior Fellow and Coordinator of the Military Transformations Program at the S Rajaratnam School of International Studies, Nanyang Technological University, Singapore. The opinions expressed here are his own.