Is the U.S. Military Preparing for War? 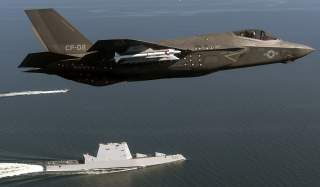 An interesting concatenation of parallel efforts to pull the U.S. military up by its proverbial bootstraps is beginning to show signs of purposeful strategic direction. There are calls from many quarters to increase the sizes of the Navy, Army, Air Force, , Marine Corps. Add to these the proposals to accelerate near-term Army land force modernization, ramp up the production rates of our most modern military systems such as Virginia-class submarines, the F-35 fighter, late model Army Black Hawk and Apache helicopters, and expand the Marine Corps’ amphibious warfare fleet.

We are beginning major new investments in a strategic bomber, an aerial tanker, a ballistic missile submarine, long-range cruise missiles and theater and strategic missile defenses. Then there are the efforts by organizations such as the Army’s brand-new Rapid Capabilities Office and the Pentagon’s Defense Innovation Unit Experimental (DIUx) to jumpstart modernization by repurposing existing capabilities in order to close critical capability gaps in such areas as electronic warfare and long-range fires. Finally, there are a wide range of potentially revolutionary capabilities being explored under the umbrella of the Third Offset Strategy.

One more data point on which to plot the curve: the Trump Administration has begun to employ a national security standard in its considerations of critical trade issues. The White House ordered the commerce department to investigate whether low-price steel imports are compromising U.S. national security. A battle is brewing over the attempts by two U.S. businessmen to buy the only U.S. mine capable of producing rare earths, minerals critical to the production of many high-end electronic systems. China now produces 95 percent of all rare earths. Unfortunately, one of the two businessmen represents a Chinese company and the other a Russian one. Look for this to be an important case for the Committee on Foreign Investment in the United States.

What we are seeing could be the first signs of national industrial mobilization. To an extent, what is happening in the United States today mirrors the tentative steps the Western Allies, but particularly Great Britain, began to take in the early 1930s as the international security environment fractured and a number of hostile powers in Europe and the Far East rose to prominence. Then, like now, the process of national industrial mobilization began slowly and somewhat fitfully. Still suffering the effects of the Great Depression, the Allies were reluctant to spend on defense. Also, they hoped to avoid provoking their eventual enemies – Germany, Italy and Japan – to even greater militarization.

In addition, these countries lacked a sufficient scientific-technical and industrial base for full national mobilization. They had to start slowly and build up the skilled manpower, production lines and research facilities that would produce the numbers and quality of arms that won World War Two.

The Trump Administration has proposed increasing the size of the U.S. Navy from its current total of some 278 ships to over 350. This is just part of a general call emanating from Capitol Hill, defense experts, and, not surprisingly, the Pentagon to rebuild, resize, and modernize the U.S. military in the face of an array of threats growing in diversity, complexity, and military sophistication. We can probably agree that should the U.S. face tomorrow the magnitude of the strategic challenges it confronted at the outbreak of World War Two, 350 ships would not be enough to win such a war. But it might be sufficient in the context of a robust Joint Force to deter potential adversaries from starting one.

National mobilization is more about the nation’s production capabilities than it is the technological wizardry of its weapons systems. For example, while the U.S. Navy possesses the most advanced aircraft carriers, surface combatants, and submarines in the world, it is presently limited as to the number it can construct. Expanding the Navy, as the Trump Administration has proposed, will depend on building up the industrial base, particularly the capacity of the nation’s seven shipyards that produce military vessels. This could be done, perhaps, as part of President Trump’s infrastructure initiative, but it would take time.

According to the Congressional Budget Office, the greatest challenges to increased production would be experienced by the makers of nuclear submarines, Huntington Ingalls Industries (HII) and General Dynamics (GD) Electric Boat. These companies did a magnificent job moving from producing one to two Virginia-class nuclear attack submarines (SSN) a year while squeezing more than a million man hours out of the process for each boat. The Virginia-class is being built in blocks of 10 boats, each introducing new features while ensuring quality and controlling costs. Now they are working to hire and train the thousands of additional workers needed just to manage the current program for two SSNs a year while adding production of the new Columbia-class ballistic missile submarine to the queue.

HII and GD might be able to add to their order book more attack submarines, but only if they have sufficient lead-time to improve their infrastructures, acquire the necessary workforce and tooling, create additional production spaces, and contract for the necessary long-lead items. Not only HII and GD, but their entire supply chain, including the makers of nuclear reactors, sonar equipment, engineering systems, and weapons, would have to be spun up.

One of the great lessons from this nation’s experience with national industrial mobilization in all its major conflicts is the importance of building what you can now, adding modifications and improvements as they become available later and only moving to new generation technologies when they are practicable.

For the Army, this means moving forward with near-term modernization and improvements to its existing fleets of tanks, fighting vehicles, artillery, rotorcraft, and rockets. For the Air Force, it is reaching an economic rate of F-35 production as soon as possible. For the Navy, it is all about the numbers of Virginia-class SSNs, Arleigh Burke-class destroyers, Ford-class aircraft carriers, LX(R) amphibious warfare ships, and small combatants (Littoral Combat Ship or new Small Surface Combatant).

Without question, a military buildup will require lots of dollars for defense. But unless the industrial base is prepared to accelerate production, all the money in the world will not produce the desired results.