The U.S. Military's $1 Trillion F-35 Stealth Fighter Is Heading to Japan for a Very Special Mission 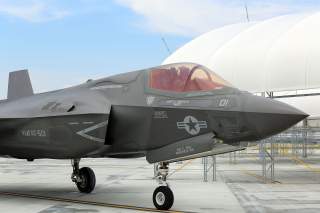 “The transition of VMFA-121 from MCAS Yuma to MCAS Iwakuni marks a significant milestone in the F-35B program as the Marine Corps continues to lead the way in the advancement of stealth fighter attack aircraft,” reads a Marine Corps statement.

Permanently basing the F-35 in Asia for its first overseas posting not only highlights the United States commitment to Asia and to the security alliance with Japan, but it also serves as a deterrent against China’s growing power. In the coming years, as Chinese air defenses become increasingly potent, stealth aircraft such as the F-35 are going to be the only means of penetrating Beijing’s airspace in the event of a war. Moreover, the Marine F-35Bs will afford Japan—which is also buying the conventional takeoff version of the aircraft—an opportunity to operate alongside American forces before its own jets enter operational service.

The Marine Corps initiated plans to move VMFA-121 to Japan in 2012 when the service designated the unit to become the Pentagon’s first operational F-35 unit. In the inventing years, the unit transitioned from the Boeing F/A-18 Hornet to the short take-off/vertical landing STOVL) F-35B with initial operational capability being declared on July 31, 2015, with an interim configuration called Block 2B.

The Block 2B configuration offers marginal combat capability, with the ability to carry two AIM-120 AMRAAM air-to-air missiles and either a pair of GBU-12 500lbs laser-guided bombs or a pair of GBU-32 1000lbs Joint Direct Attack Munitions. It also offers a limited flight envelope and limited software and sensor capability, but flying the interim configuration affords the Marines a chance to learn how to operate the jets in combat. Moreover, it allows the Marines—who skipped a generation of combat aircraft—to recapitalize a rapidly aging tactical aviation fleet.

Meanwhile, Lockheed Martin is continuing development work on the final Block 3F configuration of the F-35 and the Pentagon is drawing up plans for the next upgrade, Block 4. The Marine Corps, the next step is to operationally deploy at sea onboard an amphibious assault ship in 2018. The Navy and the F-35 tested the aircraft onboard USS America (LHA-6) last October. “The final test period ensured the plane could operate in the most extreme at-sea conditions, with a range of weapons loadouts and with the newest software variant,” a Marine Corps statement reads. “Data and lessons learned laid the groundwork for developing the concepts of operations for F-35B deployments aboard U.S. Navy amphibious carriers, the first two of which will take place in 2018.”