The U.S. Military's 6th-Generation Fighter: 5 Ways To Dominate the Sky 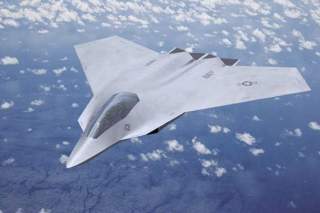 The Lockheed Martin F-22 Raptor and the Boeing F/A-18E/F are both aging platforms and will need to be replaced in the mid-2030s. Moreover, for the U.S. Air Force, it needs to replace the venerable F-15C Eagle—which was supposed to have been replaced by the Raptor until that program was prematurely terminated.

The two services are set to start a joint analysis of alternatives next year. The Navy and the Air Force are still working to determine what kind of capability gaps the new F/A-XX and Next Gen Air Dominance (NGAD)—formerly known as the F-X—will need to address. But it is already becoming apparent that the Pentagon has learnt from the $400 billion F-35 Joint Strike Fighter debacle—the F/A-XX and the NGAD are likely to be separate programs that share common technologies.

While the F/A-XX and F-X are still years away, here are five broad stroke guidelines that a “sixth-generation” fighter could follow.

The Navy and the Air Force Need Separate Airframe Designs:

One of the fundamental failures of the F-35 program stemmed from the Pentagon’s stipulation that one size would fit all. Even in 1994 the Pentagon knew that the concept of a one-size-fits-all fighter was fundamentally flawed.

As RAND Corps’ Mark Lorell wrote earlier this year, an “independent Defense Science Board (DSB) Task Force review of the BUR's findings, while generally positive, strongly warned against developing a single joint airframe aimed at maximum commonality. The DSB was aware that a common airframe, while in theory capable of achieving savings, could not cost-effectively meet both Navy and Air Force requirements. Thus, the DSB specifically recommended that the Pentagon ‘consider two different airframes, with a common engine (or engine core), common avionics architecture, common weapons and a manufacturing process to facilitate efficient production of two different airframes.’”

Thus, the Navy and the Air Force must develop separate aircraft this time around while leveraging as much common technology as possible. This is especially true of the engines, which are by far the most difficult and expensive component of any new aircraft design. Particularly, the Navy and the Air Force need to fully leverage the advantages of adaptive-cycle engine technology.

Both the F-X and F/A-XX Need to be Optimized for the Vast Distances Over the Pacific:

Adaptive or variable cycle engines are crucial to extending the range of a fighter-sized aircraft. This is particularly important as the United States shifts to a future where the Pacific theatre will be of paramount importance.

For a similar-sized motor, an adaptive-cycle engine would be able to deliver ten percent higher thrust, twenty-five percent better fuel consumption and thirty percent longer range—assuming the technology pans out. Air Force and industry sources say it looks like it will, but there are dissenters within the Naval Air Systems Command.

Adaptive-cycle jet engines adjust modes of operation to maximize fuel efficiency in varied flight conditions. For example, at cruise speeds, an adaptive-cycle engine would operate as a high-propulsive-efficiency, high-bypass-ratio turbofan. But the engine would act as a turbojet when high specific thrust is required for high speeds. The Air Force is already working on developing a 45,000-lbs-class adaptive-cycle engine that will one day power operational combat aircraft like the F-X.

An adaptive-cycle engine will greatly help with improving in power, thermal, range and fuel efficiency. It will also afford designers the option to have a smaller platform because they will not need to carry as much fuel onboard. Or for the same size aircraft, they can elect to increase its range.

Adaptive cycle engines might also give the new jets the ability to supercruise even if that’s not requirement. While it’s a great talking point for Lockheed Martin and Air Force public affairs—even on the Raptor—it’s a seldom-used extravagance. Fighters just don’t carry enough fuel for supercruise to be practical.

A future sixth-generation fighter will need to have potent electronic and cyber attack capabilities—stealth alone will not cut it going into the future. Air Force officials admit that privately and Navy officials are adamant about it.

But stealth is not going away. The F-X and F/A-XX will need to have broadband all-aspect stealth—which means that it can’t have protruding empennage surfaces like tail fins. Broadband stealth all but mandates a flying-wing design—but industry sources say that will be extremely challenging and—very possibly—impossible even with thrust vectoring.

While a flying-wing bomber is relatively simple to design without tail fins, a fighter is a different matter. A fighter does not have the wingspan to use differential control surface movement for low speed control. Nor is thrust vectoring a viable solution, particularly during landing when the engines are at a low power settings. Industry officials say it’s a vexing problem to solve—thus the Air Force and Navy might be forced to rely on electronic and cyber warfare to counter low-frequency radars that can detect and track tactical fighter-sized stealth aircraft.

The F/A-XX and F-X will likely be in service for decades. The jets need to be easily and rapidly upgradeable without the Defense Department and the American taxpayer being held hostage by the contractor. That’s perhaps the biggest lesson learnt from the Pentagon’s F-35 nightmare.

The F-22 uses an antiquated proprietary avionics architecture that is a nightmarishly difficult and costly to upgrade. The F-35 is better—but the Pentagon is forced to rely on Lockheed to modify the jet.

A completely open-architecture design would allow the Defense Department to easily upgrade the F/A-XX and F-X. Moreover, if the Pentagon owned the data-rights, it would allow the Defense Department to force contractors to compete for upgrade work. Competition should drive down upgrade costs while speeding up the process. The Air Force is heading down that path, according to service officials.

Both the F/A-XX and F-X need to be designed so that they can incorporate advanced technologies like directed-energy weapons such as lasers as they become available.

Both jets should be designed first and foremost for the air superiority role and then adapted for strike. That way the F-X can eventually not only replace the F-22 and F-15C, but it would also be able to replace the F-15E Strike Eagle. There is no projected replacement for that jet—so that could kill two birds with one stone.

The Navy too should consider developing the F/A-XX with a bias toward the fighter role. The service should make sure it can support future operations in a high-threat environment in the Western Pacific where it is certain to encounter Chinese fifth-generation fighters like the J-20.

This is just the 50,000ft overview of what the Pentagon might do for its next-generation fighter. Until the Navy and Air Force conclude their analysis, no one knows for sure what the specific capability gaps are—or what the optimal solution might be.