The U.S. Military's Greatest Weakness? China 'Builds' a Huge Chunk of It 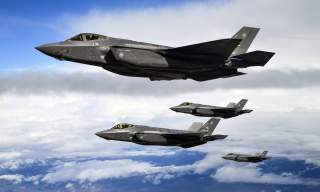 Despite political, military and trade tensions between America and China, Chinese or Chinese-owned firms play a dangerously large role in U.S. defense production, according to a new Pentagon report.

For instance, most U.S. military solid rocket engines use a substance called Dechlorane. However, "there is no domestic supplier for this material; the sole source is Occidental Chemical in Belgium," warns the Department of Defense's FY 2016 Annual Industrial Capabilities report. "Even more concerning is that the pre-cursor to make Dechlorane came from China. The Chinese source can no longer produce that pre-cursor and so there is now no source for Dechlorane in the world."

Another example is how America's war machine runs on advanced electronics, most of which are made abroad. Ninety percent of the world's printed circuit boards are manufactured in Asia, and more than half in China. This is a consequence partly as a result of China's determined effort to build up a domestic research and manufacturing base for their own advanced technologies. Meanwhile, Chinese direct investment in American companies topped $64 billion between 1990 and 2015. While this lags behind Europe and Japan (Japan has invested around $400 billion), it does give Beijing a sizable stake in the U.S. economy and industries.

As if the prospect of American weapons being dependent on Chinese-made parts is bad enough, there are already worries that Chinese-made electronics may be infected with computer viruses that would let China spy on or disable U.S. military, commercial and consumer products.

All of these concerns will only feed ammunition to President Trump and others who advocate a get-tough trade policy with China and other nations. But this toughness may be more smoke than fire. Short of nationalizing American defense contractors, the U.S. will depend on private industry to satisfy its military production needs. And private industry -- or their Wall Street shareholders -- will insist on minimizing costs and maximizing profits.

That's the essence of globalization, and the impetus for the relentless outsourcing of American manufacturing. That why Chinese goods have so captured so much of the U.S. market: not because they are good, but because they are cheap, which keeps American manufacturers and consumers happy. Made in America makes great sense in terms of national security, but American taxpayers will have to be willing to pay extra for Made in Seattle instead of Made in Shanghai.

Finally, one of the last and biggest concerns is whether it is even possible anymore to make purely American weapons anymore? As with the U.S. food supply system, it gets harder every year to be sure of where products really originate from. The Pentagon tries to save money by buying commercial-off-the-shelf technology instead of custom-made gear, but the commercial sector relies on Chinese-made components, especially electronics.

Eventually, these questions will need to be answered as the military grapples with how to maintain both security and keep down costs. The fact remains that while Made in China may be a danger for U.S. national security, transforming into Made in America will not be cheap or easy.