The U.S. Military's Strategy to Dominate the Air: Have the F-35 and F/A-18 Join Forces 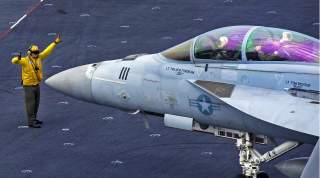 A series of advanced technologies are being introduced into what Boeing calls its Block 3. It introduces new sensors suites, range extension and potentially stealthier attributes that Boeing says will make it a perfect companion for the F-35.

A half-decade ago, U.S. Navy communicators were using defense journalists to send a clear message to Boeing: We love our F/A-18 E/Fs, but we’re done buying any more Super Hornets.

Now, that plan has been turned on its head.

Not only is the Navy planning to buy more of its mainstay aircraft, but Boeing is working on upgrades and technology that will not only keep the jets flying into the coming decades, but make them very much a major component of the service’s aerial strategy. And there’s every indication the Navy is on board with such plans for its favorite aviation weapon.

A series of advanced technologies are being introduced into what Boeing calls its Block 3. It introduces new sensors suites, range extension and potentially stealthier attributes that Boeing says will make it a perfect companion for the F-35.

“There will be real complementary capabilities,” Dan Gillian, Boeing F/A-18 and EA-18G Growler programs vice president. told Scout Warrior in an interview. He compared the future Super Hornets with JSS and EA-18G Growler electronic attack and warfare aircraft. “This is what it needs to be viable in the 2020s and 2030s.”

Here’s what Boeing has in mind.

The aircraft will have enhanced network capability with a system that improves computing power (DTP-N), network throughput (TTNT) and integration between the sensor and platform, which will allow large amounts of data on and off the airplane and make F/A-18 a smart node on the network.  This also will help It also increase ability to receive targeting information from platforms like the F-35, EA-18G and the E-2D Hawkeye.

The aircraft will have longer range with low-drag, stealthy conformal fuel tanks.  The shoulder-mounted tanks can carry 3,500 pounds of fuel and reduce drag, allowing the aircraft to operate longer, go faster, and/or carry more weight.

The Block 3 Super Hornet also will feature long-range detection with Infrared Search & Track (IRST). The long-range sensor can detect and target threats without having to depend on radar, generating a multi-ship, common tactical picture at long range and allowing the Super Hornet to operate as a smart sensor node on the network.

Pilots will be able to manage of the enhanced situational awareness with a new Advanced Cockpit System --   a 10 x 19-inch touchscreen display provides the pilot with the capability to see, track and target multiple long range targets generated by the common tactical picture.

If some of this sounds familiar, that’s because part of the package was what Boeing a year or so ago had called its “Advanced Super Hornet” offering. “We have matured our thinking,” Gillian says. “We’re thinking of how to complement with Naval Integrated Fire Control-Counter Air (NIFC-CA) in the future fight. We’re making the F-18 a smart node on the NIFC-CA network … to contribute and share.”

He adds, “We’re embracing the power of the networked carrier network. With the DTP-N, we’ve got the distributed targeting processor, a big computer that’s a Growler program of record. With TTNT, we’ve got a big data pipe that we’re moving over from Growler and E-2D. The IRST sensor is a key aspect of Block 2, with the AESA it can fuse information. So, we have a big computer and a big data pipe that can move data around.”

“Foremost in our minds are readiness and capacity,” he says.

Boeing is now “tearing apart” the two “learning aircraft” it brought to St. Louis to inspection and “destructive testing” to validate the company’s engineering work on extending aircraft life.

“We have had some great learning about how to do the service life modification program,” Gillian says. “We’ve learned we’re going to have to remove some fuel tanks to do inspection. We have to make sure we have good fuel tank repair and a support supply chain to handle the (future) churn.”

These lessons-learned and Super Hornet life-extension work has become of greater importance with the greater need for Navy aviation operations and continual slips in the F-35 Joint Strike Fighter (JSF). Indeed, the talk has moved away from how Super Hornets could be used to supplement the JSF squadrons to how the two could complement one another in the coming decades.

Right now, though, the emphasis is getting the aircraft the Navy needs now in the air and ready for deployment. Boeing is focusing on addressing the Super Hornet shortfall, Gillian.

To that end, he tells Scout Warrior, the company is addressing readiness issues for existing aircraft and getting ready to meet new Navy orders.

“The Navy is buying additional airplanes,” he said in an interview earlier this month. “We saw in the supplemental budget they were getting up toward 24 in fiscal year 2017.”

But, he notes, Boeing is still working on current modification programs to extend the service lives of the existing 568 aircraft to 9,000 hours from 6,000. Indeed, he says, the plan is to build in a 9,0000-hour- service life to the production line aircraft starting in 2020.

Some of the Boeing investments being made to address the Navy’s Super Hornet needs, he says, include the establishment of production lines in St. Louis and San Antonio as well as the bolstering of spare parts and engineering services, particularly at the Navy facility in Cecil Field, Fla.

The advancements make financial sense, Gillian says. “If they’re going to buy airplanes to address capacity, why not move to Block 3? It’s only a couple of million dollars more (per aircraft.)”

Boeing can also upgrade some Block 2 Super Hornets into Block 3s, he says.

Then the Navy would have more Super Hornets that can operate in a more complementary fashion with JSFs, or vice versa. And that appears to be what the Navy has in mind.

During some of the JSF carrier testing, for example, Navy officials have made it clear they would need a mix of F-35s, F-18s and EA-18-Gs to really make future naval aviation work.

Navy officials have talked about using discernible waves of different aircraft, especially given the stealthier nature of the F-35s compared to the existing Super Hornets.

But tactical thinking appears to be changing.

“I would state it a bit differently,” Gillian says. “There must be a balanced approach to survivability at the carrier wing level. You need a Growler for everybody. The threat has moved from the X-band to full spectrum. Traditional stealth needs support.”

"If the F-35s need to do strike missions against a particular target, the Super Hornets can provide air cover and air superiority, he says. “But if you need to take in a Harpoon, you can use the Super Hornet and the F-35 can provide overflight and air cover. You have true flexibility to do mission planning.”