The U.S. Military's 'Top Guns' in the Air Have a Big Weakness 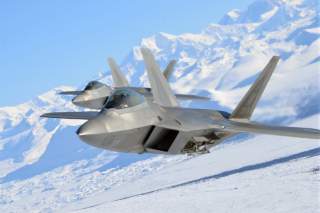 In the 25 years since the collapse of the Soviet Union, the Pentagon has more or less taken air superiority for granted; but that complacency is coming back to haunt the Department of Defense.

Neither Donald Rumsfeld nor Robert Gates took air power seriously, and as such, the U.S. Air Force is left with a tiny fleet of 186 Lockheed Martin F-22 Raptors instead of the minimum 381 it needs. If that wasn’t bad enough, those F-22s have not received the upgrades that would keep them at the top of their game. The Raptor doesn’t even have a helmet-mounted cueing system or the latest AIM-9X version of the Sidewinder missile integrated onboard yet. Perhaps more troubling is that while the Air Force is working on integrating the AIM-120D AMRAAM onboard the jet, even this newest version of the venerable active radar-guided air-to-air missile is already being challenged by enemy digital radio frequency memory (DRFM) jammers and will soon be outranged by new Russian and Chinese weapons.

In recent weeks, the Air Force has come out publicly about the need to develop a new long-range air-to-air missile. Service officials have been privately complaining about the problem for the last several years. The reason for that is China’s new PL-15 long-range air-to-air missile—which if the artist’s impressions are accurate—bears more than a passing resemblance to the European ramjet-powered MBDA Meteor missile. A ramjet-powered missile would have longer-range than a purely rocket-powered weapon and it would have exponentially better terminal phase performance. Indeed, the Chinese reportedly test fired the first PL-15 test article last month on Sept. 15. Meanwhile, Russia, too, has its own ultra long-range air-to-air missile named the K-37M—and possibly another weapon called the izdeliye 810—in development.

Air Combat Command commander Gen. Hawk Carlisle is well aware of the problem—he told reporters as such at the Air Force Association convention in National Habour, Md., last month. A new weapon that can outrange the PL-15 and operate in a DRFM jamming environment is an “exceedingly high priority” for the Air Force, he told reporters. “The PL-15 and the range of that missile, we’ve got to be able to out-stick that missile,” Carlisle said—as quoted by Flightglobal.

The problem is even more acute for the U.S. Navy, whose aircraft are not nearly as spritely as the Air Force’s F-15C Eagle—let alone the high-flying, supersonically cruising Raptor. “Carrier fighters need a long-range air-to-air missile (LRAAM), preferably with a hybrid seeker. The United States AIM-120C/D missiles are either comparable to or outranged by Chinese and Russian multi-seeker missiles, placing U.S. fighters at a disadvantage,” states a new Hudson Institute report titled Sharpening the Spear: The Carrier, the Joint Force, and High-End Conflict, which is written by The National Interest contributors Seth Cropsey, Bryan McGrath and Timothy A. Walton. “This disadvantage is compounded by the aerodynamic inferiority of U.S. carrier aircraft compared to the best Chinese and Russian fighters, which grants enemy missiles a longer lofted range.”

Indeed, for the Navy, a new missile is critical, as the authors of the report note. “Overall, a situation exists in which enemy fighters are likely to have a qualitative advantage over many U.S. naval fighter aircraft,” the Hudson Institute report reads. “An LRAAM would work to offset that situation for both U.S. existing and projected fighter aircraft. Similarly, the introduction of aerial search Infra-Red Search and Tracking systems to F-18 aircraft could improve their performance by reducing their reliance on active sensor operation.”

The Navy and the Air Force are starting to equip the Boeing F/A-18E/F Super Hornet and F-15 Eagle with infrared search and track systems because DRFM jammers wreak havoc on even active electronically scanned array (AESA) radars. The best option to counter DRFM jammers is to get out of using X-band radar—or to even ditch the radar in favor of infrared. “Getting out of X band is one option,” said one senior Air Force official. “Our fourth-gen AESAs aren't a big advantage. They're more to get us back in the game against jamming.”

While a new U.S. air-to-air missile may or may not have ramjet propulsion, it is a likely candidate, an Air Force official told me. The Pentagon is also likely to develop such a weapon with multiple sensor types onboard. Previous abortive efforts to develop a new missile included several sensor types to counter the jamming problem. As such, a new missile effort will likely feature some sort of combination of AESA radar and infrared guidance. But whatever the Pentagon decides to do, it needs to hurry up and do it—time is running out.

Failure to equip a new aircraft with an appropriate weapon system has always been a uniquely American blind-spot. For example, when the McDonnell Douglas F-15A Eagle became operational in 1976, it used the same armament as its F-4 Phantom II predecessor. It wasn’t until the introduction of the AMRAAM in 1991—twenty-five years ago—that the Air Force gave the Eagle a weapon that could take full advantage of the jet’s capability. Likewise, the F-22 Raptor is by far the best air-to-air fighter America has ever built—but it too is being short-changed by inadequate weapons. It’s time to fix that.