Is the US Navy Getting Ready to Build the Most 'Stealth' Submarine Ever? 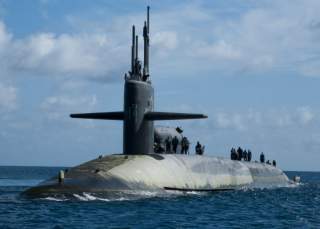 The Navy’s new nuclear-armed ballistic missile submarines will incorporate a stealthy “X”-shaped stern and noise-reducing electric drive technology as a way to try to engineer the quietest and least-detectable submarine in the history of the world, senior service officials said.

The emerging Ohio Replacement Program ballistic missile submarines, designed to patrol the undersea domain performing a crucial strategic deterrence missions, is slated to be operational by the 2030s and serve through the 2080s.

As a result, senior Navy developers are taking specific measures to integrate emerging and next-generation quieting technologies in the hopes that the secretive homeland-protecting weapons systems remain undetectable as global undersea technologies advance.

“If I am noisy I am not going to live very long. We are pushing the boundary of how to minimize our own signature while having a better ability to detect an adversary signature. We are improving in both,” Rear Adm. Charles Richard, Director of UnderSea Warfare, told Scout Warrior in an interview.

Many experts have argued that the US undersea technological advantage is rapidly being threatened by Russian and Chinese advances, leading the Navy to pursue new avenues for “acoustic superiority.” In particular, newer undersea detection technologies may make is much more difficult to elude detection.

Naturally, assuring that its location remains undiscovered is essential to the undersea strategic deterrence mission, as a nuclear-armed submarine would need to be able to hold enemy territory at risk in the event on an unexpected catastrophic first nuclear strike on the US.

Developers emphasize that many of the stealthy innovations now being integrated into the new submarine platforms are not able to be discussed – but they do stress that the new boats will be able to address emerging threats stretching all the way through the 2080s.

One key innovation is a current move toward use of a new “X”-shaped stern on the Ohio Replacement submarines to replace an existing cross-shape now on Ohio-class boats. The new shape both improves maneuverability and improves quieting technologies for the submarine, Richard said.

Manufacturers with General Dynamics Electric Boat, the firm building the ORP, is now preparing to integrate the quieter “X”-shaped stern into the boat.

“ORP does have an “X” stern as compared to a traditional rudder and stern configuration. That was done to give us the required navigational draft and provide better maneuverability and performance,” Will Lennon, Vice President of Engineering and Design Programs, Electric Boat, told Scout Warrior in an interview.

“With the X-stern, the Ohio Replacement will regain some of that maneuverability and, as a side effect, will have improved flow characteristics in the stern area while submerged.  This will improve quieting and it simplifies the hydraulic control layout in the engine room,” a Navy official said.

Unlike most existing submarines which use mechanical drive propulsion technology, the Ohio Replacement program is being designed with a quieter electric drive propulsion system, Navy officials have explained.

Navy developers have explained that rather than translating high speed turbines through reduction gears, electricity from the high-speed turbines is used to drive and electric motor and propel the ship. The electric motor substantially improves upon the already quiet mechanical propulsion now used by the existing Ohio ballistic missile submarines.

“This is much quieter than a mechanical system,” a senior Navy official said.

“Great minds have figured out how to get those gears whisper quiet,” a Navy official said. “We did not have any more tools in the bag to get the stealth that we knew we needed for this national strategic imperative.”

----For More on the Navy's Emerging "Acoustic Superiority" program - read this----

“We’ve done some experimental things with electric drive in the past, but to perfect it for the Ohio Replacement SSBN required innovation, efforts the Navy spent more than 15 years developing,” the official explained.

One analyst said electric drive for the ORP brings a number of advantages and pointed out that the Navy’s new USS Zumwalt high-tech destroyer also uses electric-drive technology. As it does on the Zumwalt, electric drive technology can also help the new Ohio-class nuclear-armed submarines generate on-board electrical power for communications and weapons systems on board the boat.

Similar to the current Ohio-class submarines, the ORP boats will be equipped to fire the Trident II D 5 nuclear missile. The Trident II D5 is a submarine-launched ballistic missile, engineered with multiple, targetable re-entry vehicles.

The Ohio Replacement program is also saving money by borrowing some cutting-edge technology already in production on the Virginia-class attack submarine procurement program – such as conformal plane array sonar, fiber-optic links between sail-mounted cameras and a control room and “fly-by-wire” digital controls allowing crews to use a joystick and touch-panel to control the boat.

--- For More Detail on Ohio Replacement Program Technologies - see this---

“The SSBN has to have a capable sonar system with hull arrays. We also stream along a towed array by putting out a string of transducers that give you that much more listening power. SSBN wants to detect an undersea adversary – if we can hear them further than they can hear us we have a tactical advantage in the undersea domain,” a senior Navy official added.

In addition, the Ohio Replacement submarines are being engineered with a new nuclear-reactor core sufficient to power the ships for 42 years. Essentially, unlike the current Ohio-class SSBNs which require a several-year long mid-life nuclear re-fueling process, the new Ohio Replacement boats will be able to continue straight through with their missions without needing this re-fueling pause, developers said.