The U.S. Navy Has Finally Qualified the Carrier-Launched F-35C for Combat 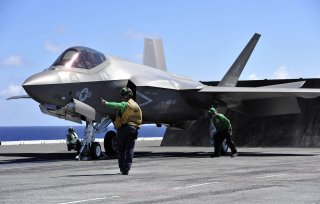 The Navy's stealthy carrier-launched F-35C is now moving much closer to combat readiness after conducting "carrier qualification" exercises from the USS Carl Vinson off the coast of Southern California.

"Being at sea for FRS (fleet replacement squadron) CQ gives us practice at what we do on deployment: launching and recovering aircraft," Hammond. "We can't always be underway with Carrier Air Wing, so these operations help us stay sharp and hone our craft while helping new pilots gain proficiency." (Full Navy statement HERE)

"The reduced setting of repeatable release hold back bar performed well both test and fleet are pleased with the progress made in reducing the force of the oscillation seen during catapult shots. The fleet will continue the assessment of the bar," Joe DellaVedova, spokesman for the Joint Program Office, JSF, told Scout Warrior.