The U.S. Navy Has given Us a Glimpse of How It Will Fight High-Tech Wars 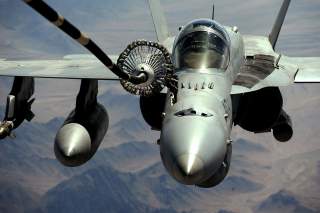 The Navy this week put on a two-day show that offered a peek into the future of high-tech combat. And the most important players happened to be robots.

At the 2017 advanced naval technology exercise, or ANTX, the Navy let the drones loose, hoping to demonstrate that robots have reached the point where they can be trusted to help protect ships, spy on enemy submarines and ward off aerial missile attacks.

The Navy’s push to turn more combat missions over to robots started years ago and is gaining new momentum as technology advances and leaders advocate for it. Newly sworn-in Navy Secretary Richard Spencer came out as a major proponent. “I think unmanned — both below the water, on the water and in the air — is an area we are just beginning to chip away at,” he told lawmakers on Capitol Hill.

The event was closed to the public, but members of Congress and reporters were invited.

Groups of sailors from the fleet were asked to participate and test the new technology. This created a “huge opportunity” for weapons developers and defense contractors to have “direct access to those driving the technical requirements,” said Ed Stewart, a technical director at the Naval Surface Warfare Center.

There is a sense of urgency behind all this. Navy strategists increasingly worry about forces fighting in “contested environments.” That is military-speak for heavily defended areas where enemies would deploy anti-ship and anti-aircraft missiles, tactical aircraft, submarines in open-ocean and coastal waters, and lay down mines and other deadly explosives in shallow waters.

In such situations, U.S. forces would have limited freedom of movement and, conceivably, they would turn to robotic systems for help — to collect and disseminate intelligence, and coordinate movements between autonomous undersea, surface, and air platforms and their operators.

In one of the demonstrations, for instance, The Boeing Co. used a robotic craft to hunt for sea mines. Hydroid Inc. and L3 Technologies launched an underwater robot from a marine research vessel and sent it off to intercept and monitor communication signals. The submerged robot, when directed, can release a canister that contains a mini-drone aircraft that would be deployed to conduct aerial surveillance and transmit data via live video feed back to the control center.

Some of the ANTX demos tested different types of fuels and power sources for unmanned devices. The endurance of robots is a major issue for the Navy. It needs them to operate for long periods of time without refueling.

One of the simulated missions involved sending bomb-detecting robots to the beach from an unmanned watercraft. An autonomous underwater spy “crawler” developed by Engineering Professional Services was used to deploy sensors, communications and navigation devices on the seabed to transmit acoustic signals.

Leidos deployed a crewless vessel called Sea Hunter in the waters off of Panama City to collect data and demonstrate autonomous launch and recovery of unmanned underwater vehicles.

The Navy is pursuing these technologies as it finds itself in an arms race of sorts with China and Russia.

“Chinese robot submarines will be blanketing the ocean floor,” Jeffrey Lin and P.W. Singer wrote in PopSci.com. “China is experimenting in building autonomous underwater vehicles of all shapes and sizes, looking to make them work together with each other, and Chinese warships too.

“The Russian Ministry of Defense is eager to showcase success in the unmanned underwater technology,” Bendett told RealClearDefense. Russian designers are working on undersea drones to imitate submarines, but the real workhorses in the Russian Navy are a series of submersibles about to enter service that are designed to stay underwater for months at a time to perform surveillance and military intelligence operations.

The U.S. Navy’s eagerness to bring more unmanned systems into the fleet has compelled defense contractors to invest in the technology. Companies in recent months have touted new breakthroughs in unmanned aviation. At the Paris Air Show this summer, military contractor Kratos Defense & Security Systems unveiled low-cost "wingman" combat drones that the Navy could potentially deploy along with the more expensive Super Hornet and F-35C carrier-based jet fighters.

The Navy has also tested the use of wide-area surveillance sensors aboard tiny drones. The technology is significant because it would allow the military to deploy eyes in the sky at all times over a city-size area day and night, track thousands of vehicles and people, and record all that data like a DVR, said Doug Rambo, vice president of business development at Logos Technologies, which developed the technology.