The U.S. Navy Has Launched a New a Ship-Killer Missile from an F/A-18 Super Hornet 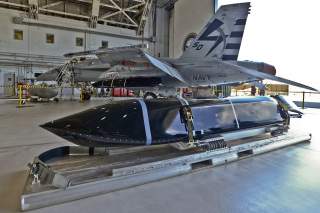 Lockheed Martin and the Navy will soon fire a high-tech Long Range Anti-Ship Missile from a new deck-mounted launcher as a way to expand options for the weapon, increase possible deployments and widen the range of potential targets, industry officials said.

A deck-mounted firing technology, would enable LRASM to fire from a much wider range of Navy ships, to include the Littoral Combat Ship and its more survivable variant, called a Frigate.

"This summer we will demonstrate the canister launch of LRASM from a “top-side” launcher that will enable long-range lethality against the evolving near-peer threat from a wide variety of surface combatants, including the Littoral Combat Ship," Scott Callaway, Program Director for Advanced Subsonic Cruise Missiles at Lockheed Martin, said in a written statement.

The weapon is a collaborative effort between Lockheed, the Office of Naval Research and the Defense Advanced Project Research Agency, or DARPA.

The upcoming test marks a new possibility for new deck-firing systems being developed by Lockheed Martin and signifies a milestone in the weapon's progress to-date.

The missile has previously been test fired from a Navy ship-firing technology called Vertical Launch Systems currently on both cruisers and destroyers – as a way to provide long range surface-to-surface and surface-to-air offensive firepower, Callaway told Scout Warrior in an interview last year.

"We have successfully demonstrated three surface launch flights from the Mk-41Vertical Launching System using the fielded weapon control systems, including one at sea in July 2016 from the U.S. Navy Self Defense Test Ship (Ex- USS Paul Foster, DD-964)," said Callaway.

The Navy will likely examine a range of high-tech missile possibilities to meet its requirement for a long-range anti-ship missile -- and Lockheed is offering LRASM as an option for the Navy to consider.

Navy officials told Scout Warrior that the service is making progress with an acquisition program for the air-launched variant of LRASM but is still in the early stages of planning for a ship-launch anti-ship missile.

While it is not yet clear, given ongoing discussion about changing requirements for the Navy's over-the-horizon missile (OTH), if Lockheed's LRASM will wind up functioning as that particular weapon. Multiple reports say the Navy may now be looking at different cost and production issues for the OTH missile competition.

“We share the concern that the OTH-WS solicitation has substantially departed from these requirements and indicates that the USN (Navy) may not leverage its investments in current programs of record.  Nonetheless we are working to determine if a LRASM based offering is appropriate for this competition," Callaway said.

However, regardless of its potential participation in the OTH program, there is little doubt about LRASMs future, given its new technology, advanced targeting system and combined air-sea firing possibilities.

A previous statement from the Office of Naval Research (ONR) said the objective of LRASM is to give Sailors the ability to strike high-value targets from longer ranges while avoiding counter fire.

"The program will use autonomous guidance to find targets, reducing reliance on networking, GPS and other assets that could be compromised by enemy electronic weapons," the ONR statement said.

The Navy recently released its emerging Long Range Anti-Ship Missile from an F/A-18 Super Hornet, marking a new milestone in the development of a next-generation, long range, semi-autonomous weapon designed to track and destroy enemy targets - firing from aircraft and ships.

The test involved a "jettison release" of the first LRASM from the Super Hornet, used to validate the aerodynamic separation models of the missile, Lockheed developers said. The test event was designed to pave the way for flight clearance to conduct captive carry integration testing scheduled for mid-year at the Navy Air Weapons Station, China Lake, California.

"The first time event of releasing LRASM from the F/A-18E/F is a major milestone towards meeting early operational capability in 2019," Mike Fleming, Lockheed Martin LRASM program director, said in a written statement.

The goal of the program is to engineer a capable semi-autonomous, surface and air-launched weapon able to strike ships, submarines and other moving targets with precision. While many aspects of the high-tech program are secret, Lockheed officials said.

Part of the rationale to move back toward open or “blue water” combat capability against near peer competitors emphasized during the Cold War. While the strategic and tactical capability never disappeared, it was emphasized less during the last 10-plus years of ground wars wherein the Navy focused on counter-terrorism, counter-piracy and things like Visit Board Search and Seizure. These missions are, of course, still important, however the Navy seeks to substantially increase its offensive “lethality” in order to deter or be effective against high-tech adversaries.