The U.S. Navy Just Gave Us the Inside Scoop on the 'Distributed Lethality' Concept 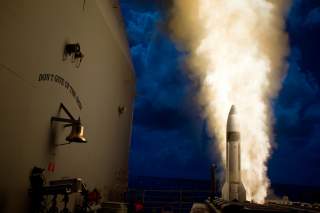 Faced with growing challenges to its domination of the world’s oceans, the United States Navy is once again focusing its efforts on gaining and maintaining control of the seas.

Since the 1991 collapse of the Soviet Union, the U.S. Navy’s mastery of the seas has been unchallenged by any other power. Without a rival, the U.S. Navy focused the efforts of its surface fleet on power projection and defending its aircraft carriers—with the overwhelming majority of the service’s offensive firepower increasingly concentrated in the air wing. However, with great power competitors such as Russia and China increasingly developing surface warfare capabilities that might one day challenge the U.S. Navy’s dominance of the waves, the service is returning to its core mission of sea control.

Rowden’s answer is a concept called distributed lethality, which he developed while serving as the Navy’s director of surface warfare (N96) in the Pentagon. “As I reviewed the requirements for our surface ships, we had a tendency to move away from offensive capability—or what I would refer to as sea control capability—to more defensive capability, which is defending those power projection assets. And I think that was a natural evolution that we executed in the wake of the Cold War in the wake of the wars that we were involved in Iraq and Afghanistan.”

However, the 21st Century is shaping up to be a much more challenging maritime security environment than the decades immediately following the Cold War. New adversaries are rising to challenge the United States on the high seas. “Pressing into the 21st Century and seeing challenges to our sea control, I had to ask myself the question: ‘If we have been concentrating by design the lethality of our Navy into the flight decks of our aircraft carriers, are we simplifying the problem for our adversaries and how do we get after that? How do we complicate the problem for our adversaries?”

The answer that Rowden and his staff developed was that the Navy should disperse the offensive capabilities of the surface fleet so that almost every vessel in the fleet contributes to the sea control mission. “What we need to do is distribute the lethality of our Navy and make all of our Navy more lethal, not just surface ships but surface ships, submarines and aircraft across the broad spectrum that we operate,” Rowden said. “We’re not going to go buy a new Navy, we have a great Navy right now, but are there things we can do with the weapons and the weapons systems in order to get offensive capability into our ships in order to hold our potential adversaries at risk at range.”

To achieve the Navy’s goals, the service will not only have to invest in upgraded hardware, but also on improved training and tactics. Additionally, the Navy will have to ensure that it attracts a bright talent pool that will be fully invested in the surface warfare mission area. One way the Navy is developing the tactics and talent necessary to execute the distributed lethality concept is to set up the surface fleet’s equivalent of naval aviation’s famed Top Gun school—the Naval Surface and Mine Warfighting Development Center. The new school not only trains experts in surface warfare, anti-submarine warfare, mine warfare, amphibious warfare and integrated and air missile defense, it also develops new tactics and helps prepare carrier strike groups for war. “That organization is off to an absolutely tremendous start,” Rowden said. “The impact they have had across the fleet in the preparation for our strike groups to sail is really phenomenal.”

But while tactics and training will help create sharp surface warfare officers who can exploit the full capabilities of the Navy’s warships, American sailors will need new tools to take on the growing threat of enemy surface forces. While the Navy is working on developing new weapons such as the Long Range Anti-Ship Missile (LRASM)—which it might adopt for its warships—the service is modifying many existing armaments and ships so that they contribute to the sea control mission.

One of those weapons is the Raytheon Standard SM-6 missile, which was originally developed as an extended range anti-aircraft and anti-missile weapon. However, the service discovered during the missile’s development that it could be adapted to be used as a long-range anti-ship weapon. “As we were developing that anti-air weapon, given the fact that type of seeker that we had built into the that, we asked ourselves the question: ‘Could we modify it to make it an anti-ship weapon as well because it had an active seeker it.’ And so we went to work on that.”

The result was a dual-capable weapon that not only far out-ranged any currently installed anti-ship weapon onboard a U.S. Navy surface combatant, but a missile that was far faster and more survivable against some of the most fearsome potential adversaries the American surface fleet might encounter. “That has a range that is well beyond the range of missiles we had in the inventory with respect to the anti-ship cruise missiles,” Rowden said.

However, the SM-6 is just the beginning. The Navy is looking at other opportunities to extend the range of its anti-ship capabilities. One candidate for that role is the Tomahawk cruise missile. While the Navy fielded an anti-ship Tomahawk missile variant decades ago, that weapon was withdrawn from service during the 1990s partly due to its questionable effectiveness. “One of the things we’re looking at is: ‘Is it possible to put a seeker in a Tomahawk?’” Rowden said. “We had Tomahawk anti-ship missiles a long time ago, and we took those out of the inventory. But given our advances in our ability to target at range, we’re looking to see if in fact that’s another weapon that we want to go after.”

The Navy is already starting to field the distributed lethality concept. Rowden noted that there are already several Baseline 9 configuration Aegis destroyers already serving with the fleet. But while Aegis cruisers and destroyers—not to mention the new Zumwalt-class warships—are the Navy’s premier surface combatants, every ship in the service’s inventory has a role in distributed lethality. “I see roles to play across the spectrum of ships that we operate,” Rowden said, noting that in addition to the cruisers and destroyers, the littoral combat ships will also have a prominent role in the sea control fight.

Indeed, the Navy is considering adding Mk-41 vertical launch tubes onboard the service’s amphibious assault ships—especially now that those vessels can carry the Lockheed Martin F-35B Joint Strike Fighter. Those vessels might be able to contribute significantly not only to sea control, but also to the service’s ability to maneuver from the sea. “Given the Joint Strike Fighter coming to the flight decks of our big-deck amphibs and given the capabilities in those fifth-generation fighters, I think we need to think differently about how we’re going to utilize our amphibious ships in the sea control fight as well,” Rowden said. “So I am able to go to the Naval Surface and Mine Warfighting Development Center with all of these possibilities.”

At least in the case of the San Antonio-class amphibious assault ships, it would be a relatively easy modification to add missile tubes to those ships. Rowden noted that those vessels were built with the space, weight, power and cooling capacity to accommodate the Mk-41 launchers. “That’s certainly an option to backfit those ships as we go forward,” Rowden said. “I think what we have to do is, as we work through this, is to figure out if that’s the right call to make.”

Ultimately, the Navy has a simple goal for distributed lethality: additional options for the national leadership. The Navy will be able to offer more than just a carrier strike group, expeditionary strike group or a submarine in times of crisis if Rowden’s vision comes to fruition. “At the core of what we’re driving is to give the leadership of our country as many tools in the toolbox to accomplish what the country needs our Navy to do,” Rowden said. “If I can get different tools into that tool box that allows the leadership different options as we look at the variety of threats that we’re facing in the future, I think that’s my responsibility to go do that.”