The U.S. Navy and Marines are Going to 'War' in the Red Sea 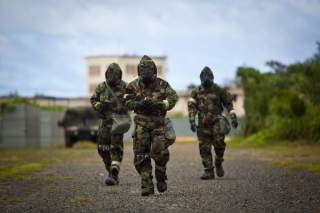 The kind of enemy threats to international shipping that started to plague the sea lanes of the Red Sea last fall normally would force U.S forces to form an ad-hoc military team to address the problems.

But in Bahrain, U.S. Marine Corps Brig. Gen. Francis L. Donovan never had to scramble up such a plan. As the commander for Naval Amphibious Forces, Task force 51 and 5th Marine Expeditionary Brigade, he had everything needed on hand.

“In September and October, when the first threats in the Red Sea came up, we had elements of a MAGTF (Marine Air-Ground Task Force) supporting refueling tankers,” Donovan tells Scout Warrior. “We had a cruiser-destroyer squadron. Our responsibility was to ensure the free flow of commerce through the south Red Sea. We controlled that. We controlled district assets. We had the authorized ability to employ weapons from ISR (intelligence, surveillance reconnaissance) assets. We led that fight until the situation balanced out. For that specific mission set, we happened to need more maritime.”

More maritime meant more naval. But at any given time in that area of responsibility, Donovan may need to employ more Marines. Normally, such shifting around could strip Corps and Navy bureaucratic gears. But under Donovan, the two are combined into one administrative entity.

“It is a unique situation,” he explains. “It’s a unique command structure – one integrated staff … with two three-stars lead-blocking for us.”

As a result, Donovan and his team have a lot more assets directly under their control, including some of the U.S. more forward-thinking ship concepts.

For example, they have the USS Ponce, an Austin-class amphibious transport dock ship formerly designated LPD-15 that is now Afloat Forward Staging Base (AFSB(I))-15, to act as a launching platform for mine-sweeping MH-53E Sea Dragon helicopters in the Persian Gulf. The vessel also has been used to test naval shipboard lasers.

In other areas, Donovan points out, forces might be joined together for exercise or specific operations under ad-hoc staff combinations. “We live it every day,” he says. “All of our systems are integrated every day, under a single command.”

When integrating the staff, he says, the focus is not on Marine or Navy on things like experience and continuity. “We don’t look at ‘blue’ or ‘green,’” he said.

That kind of administrative and operational splicing is particularly important in places like the integrated operations center, he says, but it permeates throughout.

“We can look across the enterprise in Bahrain,” he says. “We look across he folks that run mine countermeasures, that run fleet logistics. We live in theater, in theater headquarters – we are active every day in blue-green.”

That enterprise even extends to adjacent operations. “We have daily operations. We’re exercising, we’re talking every day. If we need additional logistical support or mine clearance support -- we have those relationships every day. We already execute together with a team already in place, not an ad-hoc pickup team.”

That integrated team, though, can use some material reinforcements, he says.

“We need more amphibious ships, more purpose-built amphibs,” he says. He would like to combine more of those vessels with cruisers and destroyers for a lethal pairing.

Rounding off the combined force, he says, is a need for more replenishment ships and minesweepers.  He says, “We are behind in our mine operations.”

While Donovan keeps account of current shortfalls he also keeps an eye toward the future with the aviation advent of the F-35 squadrons. “When the JSF (Joint Strike Fighter) comes on line, that’s 5th-generation,” he says. “It’s going to be in high demand.”

All of this – an integrated blue-green team, restocked current capability and technologically advanced future forces will help the Gulf forces complete their “streetfighter” role. “It’s up in-close,” he says, “valued by everybody.”