Is the U.S. Navy Moving too Fast on its New Frigate? 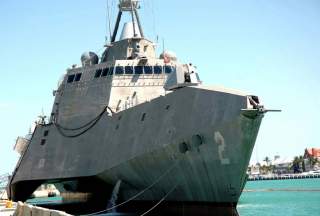 No major acquisition program has gone through the multiple perturbations in so short a time as experienced by the Littoral Combat Ship (LCS) and not only survived but seemingly flourished. What was originally conceived of as a small, extremely fast, maneuverable, expendable and, therefore, relatively inexpensive light warship for operations such as mine countermeasures and countering fast attack craft in inshore or littoral waters has morphed into a multi-mission frigate intended to fight and survive in high-end battles. Gone are the original ideas of a low cost vessel built to commercial standards, survivability based on speed, rapidly reconfigurable operations based on plug and play mission modules, small crew size and limited suite of weapons, electronic warfare systems and sensors. Virtually nothing of the LCS’s original operational concept, acquisition strategy and approach to manning and sustainment remains.

The fact that the program continues to progress even while undergoing such turbulent change is a testament to the ingenuity and innovativeness of the two shipbuilder/integrator teams, one led by Lockheed Martin with Marinette Marine and the other by Austal and General Dynamics.  In just the past two years, these teams have had to deal with decisions by the Office of the Secretary of Defense (OSD) and the Navy that truncated the total number of LCS at 32 and the overall class size to 40 vice the original plan for 52, radically changed the weapons and sensor suites on the last LCS, turned the final eight ships of the planned total into a larger and more capable variant of the LCS design, and down selected from two to one contractor team by 2019. The teams responded to all these demands while simultaneously delivering vessels at an exceptionally low price.  In addition, both shipbuilders, Marinette and Austal invested significant corporate resources to improve the way they built the LCS. On top of these major changes, the Navy last week announced that it was radically altering its plan for assigning missions, modules and crews, abandoning modularity in favor of single missions and larger, dedicated crews.

On top of all these changes that continue to ripple through the LCS program like the aftershocks that follow a major earthquake, OSD and the Navy have asked the two teams to design the new LCS variant and compete for the contract in what can only be described as lightning speed.  Initial analyses for a frigate only began in 2015 as part of then-Secretary of Defense Chuck Hagel’s review of the LCS program. The Navy has announced that it plans to release a request for proposal (RFP) in late FY 2017 with an award in FY 2018. In essence, this means that the two teams, assuming both decide to compete, will have only two years to do their analyses, conduct all the trade studies, come up with a final design and price their proposal.

The pace for the new frigate competition might make sense if what was being requested was truly just a variant of the approved LCS designs. But this cannot be the case. The Navy wants a ship that is bigger, with more range, less speed, a much more robust set of weapons, sensors and combat systems, greater survivability and a substantially larger crew. These changes will require much more than just a “plug’ to make the new frigate larger than the LCS. These factors will challenge naval architects, shipbuilders and integrators in a host of ways.

In addition, the Navy has decided on a different acquisition strategy, eschewing the current contractor-centric approach and instead returning to its traditional way of doing business in which most of the systems to be deployed on the frigate will be government furnished equipment (GFE). This means the Navy has to rush its decisions on what kinds of weapons, sensors and electronic warfare systems it wants or risk a mismatch between the selected design and desired capabilities.

What is the rush to get a new frigate on contract? If there is one lesson from the history of the LCS program it is encompassed in the old adage “act in haste, repent at leisure.” Imagine how different the LCS program would look today if some of the original assumptions and requirements had been more carefully thought out. Many of the factors that led to the decisions to reduce the total buy of LCS, up gun some of these ships and acquire a frigate are still in flux. The Navy only revised its LCS organization, deployment and manning plans last week. Imagine what changes OSD or the Navy might decide to make next week.  The frigate’s performance parameters proposed today could be different tomorrow.

The Navy should consider delaying releasing the frigate RFP at least until FY 2019 in order to give both itself and the prospective two competitors enough time to do a thorough design based on careful and complete assessment of the systems the Navy will furnish as GFE. In the meantime, OSD should propose adding more LCS to the FY 2017-2018 buy. Since the Navy has decided that the first four LCS will be used only as test vessels, the actual number of deployed ships will be less than the minimum requirement of 40. This will prevent a break in production, deliver four more enhanced capability versions of LCS and allow for deliberate consideration of the design features for the new frigate.