The U.S. Navy Needs More Submarines—and Congress Is Coming to the Rescue 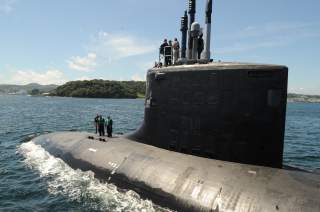 The House Armed Services Committee’s Seapower and Projection Forces Subcommittee markup of the 2018 National Defense Authorization Act will allow the United States Navy to enter into a multiyear buy for 13 Virginia-class attack submarines (SSNs) over the next five years.

The subcommittee’s language stipulates that the Navy buy the nuclear-powered attack submarines at a rate of no less than two boats per year. Under the bill, the Congress would provide the Navy with advanced procurement authority to buy three submarines per year in 2020, 2022 and 2023.

“One of the messages we have heard loud and clear from our military commanders is the ever-growing need for undersea capabilities, particularly in light of rapidly changing dynamics around the world,” Joe Courtney (D-CT), ranking member of the Seapower and Projection Forces Subcommittee, told The National Interest in a written statement.

“Meeting that demand and the increasing fleet requirements for our attack submarine force will require us to take aggressive but realistic actions to increase submarine production. This proposal, which was crafted on a bipartisan basis along with Chairman Wittman and our colleagues on the subcommittee hits that mark by laying out a path to achieve a three-submarine build rate where capacity exists in the submarine industrial base. As with the larger mark will be present later this week, the submarine provisions will help achieve the needs of our nation through a larger and highly capable naval force.”

The Navy desperately needs to increase its submarine construction rate in order to rebuild its undersea force. The Navy’s submarine force is set to dwindle down to only 41 attack boats by 2029 as the older Los Angeles-class SSNs are retired.

The service must maintain a build rate of two Virginia-class boats while it builds the new Columbia-class ballistic missile submarines (SSBN) to replace the aging Ohio-class boomers if there is any hope of recovery. Indeed, the Navy is currently planning to do so.

But authorizing the construction of three attack submarines during the years when the service is not building a Columbia-class SSBN will help the Navy rebuild its submarine force much more quickly.

Nonetheless, it will take the Navy decades to rebuild the submarine force—which is in the sorry shape it is in due to decisions made during the Clinton and second Bush Administrations. If the Seapower and Projection Forces subcommittee markup survives until the NDAA is enacted into law, it will just be the start of a long process to rebuild the fleet.