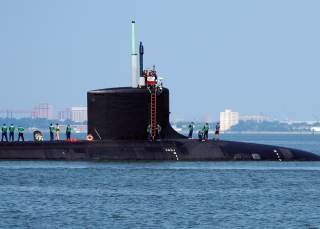 Huntington Ingalls Industries Newport News Shipbuilding launched the attack submarine Indiana late last week. Over the next several months, workers will fit the new vessel with various systems and make sure that the hardware meets specifications.

Indiana will eventually become the United States Navy’s sixteenth Virginia-class SSN when she is eventually delivered and commissioned into service. But while the Virginia-class submarine program is a bright spot in the Navy’s acquisitions portfolio, the service needs more of those vessels as SSN fleet dwindles well below the Pentagon’s requirements.

“Launch is a true testament to our shipbuilders’ roughly four years of hard work,” Matt Needy, Newport News’ vice president of submarines and fleet support, said in a statement.

“Over the next several months, we will work closely with the Indiana crew to bring this great ship to life. With the Navy’s recent increase in SSN force structure requirements from 48 to 66 submarines, the shipbuilders here at Newport News and at our teaming partner, Electric Boat, understand the importance of getting these highly valued ships delivered and ready for mission-tasking by our Navy leadership.”

The first step towards rebuilding the SSN fleet is to build a second Virginia-class submarine in 2021—which the Navy has requested in the President’s fiscal year 2018 budget submission. Previously, the Navy expected to drop to building one SSN per year during the years that it planned to build a new Columbia-class nuclear-powered ballistic missile submarine (SSBN).

However, while procuring a second Virginia-class submarine in fiscal year 2021 will help to stem the decline, the Navy will need to sustain SSN production at two per year to eventually rebuild the fleet. In fact, the Navy might need to increase the production rate to beyond two boats per year if it hopes to realistically field a fleet of 66 attack submarines.

“We intend to, and we’re laying the groundwork, to sustain a two submarine per year procurement rate – because that is our number-one shortfall,” acting Navy Secretary Sean Stackley told the Senate Appropriations Subcommittee of Defense on May 24.

Acting Navy acquisition chief Allison Stiller went even further. She told the House Armed Services Committee’s Seapower and Projection Forces subcommittee on May 24 that the Navy is considering adding a third Virginia-class boat in 2022 and 2023. Those are the years when General Dynamics Electric Boat and Newport News are not busy building Columbia-class SSBNs.

“FY ‘22 and ‘23 are the years we are not building a Columbia, so those are years, when we looked at the future fleet plan, we identified that would be an opportunity to get to three a year,” Stiller told the Congress.

Ultimately, if the Navy wants to build a 66 attack submarine force, it has no choice but to build three SSNs per year. It’s really just a question of Congress providing the funding.