The US Navy and Russia: Heading Towards a Crisis in the Mediterranean? 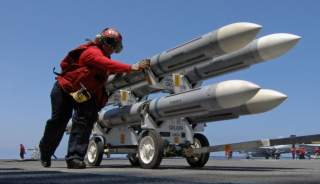 The U.S. Navy is unhappy with Russian naval forces harassing its ships in the Eastern Mediterranean during combat operations over Iraq and Syria. The service considers the Russian behavior to be dangerous and unprofessional in the extreme.

Particularly concerning for the Navy leadership are the actions of the Russian frigate Neustrashimyy that interfered with flight operations onboard the carrier USS Harry S. Truman (CVN-75) and which almost collided with USS Gravely (DDG-107), a U.S. Navy Arleigh Burke-class destroyer on June 17. Later on June 30, another Russian frigate Yaroslav Mudry interfered with the operations of the Ticonderoga-class cruiser USS San Jacinto (CG-56) and the carrier USS Dwight D. Eisenhower (CVN-69).

“I think it is very important that sailors and officers on the bridge of a ship —whatever nationality it is—act prudently and communicate frequently to avoid any mistakes or miscalculations,” Vice Adm. James G. Foggo III, who is simultaneously commander of the U.S. Navy’s 6th Fleet, Joint Force Maritime Component Commander Europe and NATO’s Naval Striking and Support Forces NATO, told The National Interest. “We believe we acted prudently in the vicinity of our aircraft carrier, which was conducting carrier strike missions from the Mediterranean and the Neustrashimyy acted in a way that was not appropriate and not in accordance with the U.N. Convention on the Laws of the Sea. And so we protested that behavior to the Russians.”

Russians, however, don’t agree with the American account of the events, Foggo said. Foggo said that normally U.S.-Russia maritime disputes are resolved under the auspices of the Incidents at Sea Agreement. Indeed, the most recent annual Incidents at Sea meeting took place in Moscow last month, Foggo said. Nonetheless, though Foggo descried the meeting as “frank “ and “productive,” the Russians’ unprofessional behavior—such as those exhibited by Neustrashimyy—continues unabated. “Which is not the kind of conduct I would expect from a professional warship and a professional navy,” Foggo said.

Alarik Fritz, a senior analyst with the Center for Naval Analyses who serves as Foggo’s advisor, said that U.S. Navy prides itself on maintaining the highest professional standards of seamanship. “I think at the end of the day, everyone knows the U.S. Navy—because it is extremely professional—is not at fault here,” he said.

Moreover, the Russians’ behavior disrupted flight operations onboard the U.S. Navy’s aircraft carriers, which were conducting airstrikes against the ISIS terror network in Syria and Iraq. “This behavior was disruptive to us while we were conducting launch and recovery of aircraft on a mission which the Russians believe is also in their interests—and that is to strike terrorist targets in the Middle East,” Foggo said. “By their behavior, they’re working across purposes to their own interests—which I don’t understand.”

Despite the actions of the Russian vessels, Foggo said the United States would continue to try to work with the Kremlin’s forces. ‘We’ll continue this dialogue with them and we’ll continue to remind them when their behavior does not meet the requirements and the expectations of the U.N. Convention on the Laws of the Sea,” Foggo said.