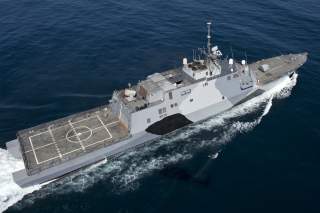 The U.S. Navy has begun the process of acquiring a new guided-missile frigate, several years after decommissioning the last of its old Perry-class FFGs.

On July 10, 2017, Naval Sea Systems Command formally asked the U.S. shipbuilding industry to propose designs for a new guided-missile frigate that the Navy is calling the FFG(X).

The Navy wants to buy 20 of the ships between 2020 and 2030. The frigates would replace at least 20 of the Littoral Combat Ships that the sea service previously planned to acquire. The LCS has come under fire for being too lightly-armed for independent patrols in contested waters.

“The FFG(X) will normally aggregate into strike groups and large-surface-combatant-led surface action groups but also possess the ability to robustly defend itself during conduct of independent operations,” the request for information explains.

The FFG(X) would build upon the LCS’s capabilities — and could even share a hull with the earlier class. Like the LCS, the new frigate should function as a mothership for various unmanned vehicles — flying, tethered and subsurface — in order to “gather information and then act as a gateway to the fleet tactical grid using resilient communications systems and networks.”

But the frigate must carry more and heavier weaponry than the LCS does. Both LCS variants — Austal’s Independence-class trimaran and Lockheed Martin’s Freedom-class mono-hull design — possess no long-range air-defense capability.

Lacking heavy anti-air missiles, the LCS is dependent on destroyers and cruisers for protection in the most intensive combat. Likewise, the LCS cannot adequately protect other vessels from air attack, limiting its usefulness as a convoy escort.

The FFG(X) would address that shortfall. “The Navy is particularly interested in understanding the trade space surrounding the addition of launcher capability to support Evolved Sea Sparrow Missile Block 2 and/or Standard Missile-2 active missiles,” the request for information states.

As a bonus, the same launchers might lend the FFG(X) greater surface-to-surface punch than the LCS possesses. As originally designed, the LCS lacked a heavy anti-ship missile. As a gap-filler, the Navy has installed four launch-canisters for Harpoon surface-to-surface missiles on some forward-deploying LCSs.

By contrast, the request for information on the new frigate asks shipbuilders to consider whether heavy surface-to-surface missiles could be “cost-effectively integrated” into the same launch systems that, at a minimum, must be compatible with ESSM or Standard anti-air missiles.

To get the new FFG(X) into the fleet by the mid-2020s, the Navy wants industry to propose variants of existing designs. Lockheed and Austal could propose bigger versions of their LCS models. Huntington-Ingalls might offer a frigate version of the National Security Cutter it builds for the U.S. Coast Guard.

Foreign designs could also be candidates, provided their builders can find U.S.-based partners in order to satisfy regulations that require the Pentagon to source weaponry from American industry.

It’s unclear how much an FFG(X) might cost. Baseline LCSs set back U.S. taxpayers around $500 million apiece.

As of mid-2016 the Navy had a requirement for 52 small surface combatants as part of an overall fleet of around 300 frontline warships. Based on that requirement, by the 2030s the Navy could operate 32 LCSs and 20 FFG(X)s.

But Pres. Donald Trump and some lawmakers and senior military leaders want to boost the fleet to at least 350 ships. In that case, the number of small surface combatants might also increase.

Not coincidentally, the Navy has floated the idea of bringing back into service a small number of recently-decommissioned Perry-class frigates as an expedient way of growing the fleet.