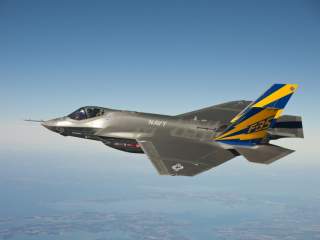 The Pentagon has ordered the U.S. Navy to convert its Unmanned Carrier Launched Airborne Surveillance and Strike (UCLASS) aircraft into a robotic ship-based aerial refueling tanker. The new unmanned tanker program is the Navy’s solution to extend the range of its carrier air wings to strike deep inside heavily defended airspace—such as sites in Russia, China and elsewhere deep within Eurasia.

While the Pentagon’s move quashes the dreams of many in Congress, Washington think tanks and the defense industry who had hoped for a new long-range unmanned carrier-based stealth bomber, the new Carrier Based Aerial Refueling System (CBARS) program had been foreshadowed for at least three years.

Indeed, in late 2013, the U.S. Navy’s director of air warfare, Rear Adm. Mike Manazir, had explicitly told me that the UCLASS would be optimized to extend the range of the stealthy Lockheed Martin F-35C Joint Strike Fighter. “We’re going to put a refueling capability into them and they’ll have an endurance package in them,” Manazir said. “They’ll be able to give away something like 20,000 lbs. of gas and still stay up for seven-and-a-half hours.”

As such, the basic premise behind the unmanned CBARS program is that it would be able to extend the range of the carrier’s air wing. Right now, the Navy’s carrier air wings have to rely on the U.S. Air Force’s “big wing” tankers like the KC-135 or KC-10. Boeing F/A-18E/F Super Hornets can also be used as “buddy refuelers” when loaded up in a so-called “five wet” configuration—however, that eats up the jet’s airframe life quickly. The CBARS would free the Super Hornets up for their strike fighter role while reducing the air wing’s dependence on Air Force assets.

While the Pentagon has not explicitly come out and said it, the CBARS—or a variant of that airframe—might also be used as a missile caddy to help defend the carrier under the Naval Integrated Fire Control–Counter Air (NIFC-CA) construct similar to the Pentagon’s arsenal plane. Indeed, Manazir had suggested that the UCLASS could be used as a flying missile magazine for the Northrop Grumman E-2D Hawkeye or a F-35C flight leader. “Maybe we put a whole bunch of AMRAAMs (Advanced Medium-Range Air-to-Air Missile) on it and that thing is the truck,” Manazir said. “So this unmanned truck goes downtown with—as far as it can go—with a decision-maker.”

As such, it might also be used to haul long-range networked weapons within the NIFC-CA construct alongside the F/A-18E/F and EA-18G Growler. Under Manazir’s plan, the stealthy F-35C—whose range would be extended by the CBARS/UCLASS—would fly deep inside enemy territory and act as a flying sensor node. It would use its sensors to identify targets, rely that data back to the shooters (F/A-18E/Fs, EA-18Gs, surface warships and submarines), and then provide terminal-weapons guidance and battle-damage assessments using an advanced tactical datalink. “Let’s say we’re in an anti-access environment and we’re going to go deep, we would launch all the airplanes off, get them all set, and we would push the F-35C way inside,” Manazir had said. “He would go in there using his X-band stealth technology, and go in there and he would get radar contacts and surface contacts and would ID them for us.”

Effectively, Manazir described in detail back in 2013 what is transpiring in the Navy’s plans now. No one should have been surprised that the UCLASS has morphed into a tanker, or that the Pentagon is buying more F-35Cs or F/A-18s—Manazir spelled out the plan more than two years ago in detail.