The U.S. Navy's Damaged Destroyer to Be Repaired in Japan 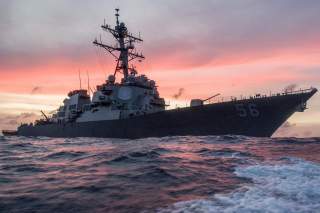 The U.S. Navy will repair the Arleigh Burke-class guided missile destroyer USS John S. McCain (DDG 56) at Yokosuka, Japan, rather than bring the ship back to the continental United States for repairs.

“Damage assessments conducted while the ship was moored in Singapore since the Aug. 21 collision revealed the scope of work could be completed in Japan at the lowest estimated cost and returns the ship to full service at the earliest opportunity,” reads a statement from the U.S. Pacific Fleet. “Repairing the ship in Yokosuka, where it is already part of the Forward Deployed Naval Forces (FDNF) assigned to U.S. Seventh Fleet, also provides stability and continuity to crew members and their families. In addition to supporting repairs to the ship, the crew will focus on training, readiness and certifications to prepare the ship for operational tasking in Seventh Fleet.”

On October 5, the stricken vessel was towed out of the Changi Naval Base in Singapore to meet heavy lift transport vessel MV Treasure, onboard which the crippled warship will be transported to the U.S. Naval Ship Repair Facility-Japan Regional Maintenance Center in Yokosuka. According to the Navy, Treasure will have to be partially submerged while divers secure McCain onboard after which it will rise to the surface. It will take several days to complete to tow the destroyer to the transport and load it onboard Treasure.

McCain was severely damaged during a collision with a merchant ship called Alnic MC while underway east of the Straits of Malacca and Singapore on August 21. Ten sailors were killed in the accident. There are investigations that are currently ongoing to determine what caused the accident.

The McCain collision was the latest in a string of accidents that has plagued the Pacific Fleet. Earlier, sister ship USS Fitzgerald (DDG-62) also collided with a cargo vessel off Japan in June—costing the lives of seven sailors. Additionally, in May USS Lake Champlain (CG-57), a Ticonderoga-class missile cruiser collided with a South Korean fishing boat off the South Korean coast. Further, in January, USS Antietam (CG-54) ran aground near Yokosuka.

The string of accidents has raised questions about the training and readiness of the Pacific Fleet, with reports of overworked crews who are often forced to complete training on the job while the ships are underway. The Navy is starting to take action to fix the problem, but only time will tell if the measure the service has taken will pay off.