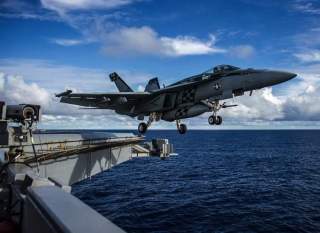 Lone among the U.S. Navy’s mighty Nimitz-class carriers, USS Ronald Reagan (CVN-76)—and its accompanying air wing CVW-5—is forward deployed in Japan to maintain America’s presence in the Western Pacific. The massive carrier and its escorts serve as a deterrent to would-be adversaries in the region, which include Russia, China and North Korea.

But while we often discuss the U.S. Navy and its mission to deter aggression and preserve access to the global commons, we rarely see the men and women who carry out those missions. Indeed, outside the small community of national security professionals here in Washington, D.C., the public rarely gets to see the U.S. Navy in action.

Recently, my good friend Commander Guy “Bus” Snodgrass—who commands VFA-195 ‘Dambusters’ at NAS Atsugi, Japan—sent me a video of his elite F/A-18E Super Hornet squadron on deployment. The squadron’s junior officers assembled this video in the run up to the squadron’s 65th anniversary on June 1. The video includes some spectacular footage from air-to-air and air-to-surface training mission as well as footage from combat sorties.