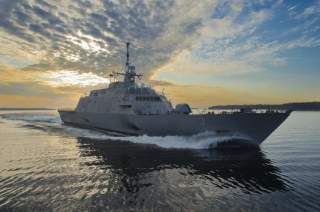 The Littoral Combat Ship (LCS) is like the cat with nine lives. It has survived more near-death experiences than just about any other Navy program in modern times. First there was the problem with trying to build a military vessel based on commercial standards. When Navy shipbuilding rules were applied, big surprise, the cost per hull went way up and LCS no longer looked like a bargain.  Then there were seemingly endless problems with the mission modules intended to allow the ships to perform multiple missions serially by simply swapping out payloads. The acquisition strategy was certainly unusual. The Navy made the bold decision, widely criticized at the time and even today, to acquire two variants. Then there was Secretary of Defense Ash Carter’s decision to truncate the program at 40 ships vice the planned 52. Most recently, the Chairman of the Senate’s Armed Services Committee, Senator John McCain, blasted the Navy and the Program Office for continuing problems with the reliability of an unmanned undersea vehicle that was part of the mine countermeasures mission package.

Perhaps the proper analogy is to the mythical phoenix, because the program has risen from the ashes at least three times. In each instance the concept of operations changed and with it the requirements. The LCS went from a lightly armed, essentially unarmored, high speed close-in patrol boat to a more heavily armed, slower, littoral and brown/blue water combatant and finally, to a new class, a frigate variant, with capabilities that will exceed that of the Perry-class frigates.

The current plan for the LCS, as directed by the Secretary of Defense, is to cut the total procurement to 40 (six ships, three of each type have already been commissioned and approximately 20 more are being built or under contract). One of the two variants and the shipyard that builds it will be terminated by 2019. The final eight ships will be converted to a frigate based on an as yet unapproved design variant of one of the two LCS classes.

In addition, the Navy is already deep into a program to improve both the survivability and lethality of at least some and possibly all the baseline littoral warships. Additional armor will be added to protect critical compartments and functions. New weapons are being deployed, particularly existing tactical missiles capable of sinking corvettes and small combatants. The Program Office recently conducted a successful series of tests with a variant of the Hellfire missile. Work is underway to provide the 57mm gun with precision rounds that will substantially increase its lethality. There will also be improvements to the LCS’s sensor suite, defensive systems, electronic warfare capabilities and sonar systems.

The initial concept behind the LCS was for a modular ship, with a basic sea frame and common operating systems, an open architecture and standard interfaces that would allow the Navy to plug and play a wide variety of sensors, weapons and C3 capabilities, as well as specialized mission modules for surface warfare, anti-submarine and mine countermeasure missions. Ironically, after a number of false starts and program redirections, a modular ship seems to be exactly what the Navy is going to get.

The “reborn” LCS, both the upgunned versions of the baseline designs as well as the new frigate variant are but a couple of the possible options. The current program is being restructured to allow for continual upgrades. Future possibilities, particularly for the new frigate variant, include adding air and missile defenses based on the Standard Missile 2 and 3 series and a phased array radar, creating a mini-arsenal ship loaded with Harpoons or other over-the-horizon missiles and even deploying directed-energy weapons. The LCS is well-suited to take advantage of advances in both manned rotorcraft and unmanned aerial vehicles to further extend its reach and effectiveness.

Despite the desire of the current Secretary of Defense to truncate the LCS program and spend the savings on higher priority procurements such as more F/A-18 and F-35 fighters, it is not only likely that the original goal of 52 hulls will survive but it could even be increased. Given all the options available in both the baseline upgunned LCS and the new frigate, as well as expected advances in technologies associated with power, sensing, lethality and command and control, why shouldn’t the Navy continue to produce ever more capable small ships?