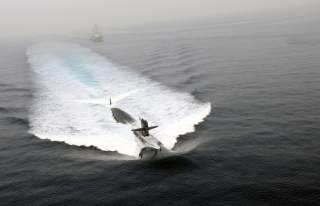 “There is prototyping going on for new versions of underwater weapons with significant underwater range and a wider variety of payloads. We are now coming up with effects that better enable us to provide a broader range of options for future commanders,” Rear Adm. Charles Richard, Director of Undersea Warfare, told Scout Warrior in an interview.

Richard did add that some of the improvements to the torpedo relate to letting more water into the bottom of the torpedo as opposed to letting air out the top.

Tom Jarvo, Director and General Manager of Targets, Torpedoes and Sensors, Lockheed Martin, told Scout Warrior in an interview that Lockheed is noiw delivering 20-upgrade kits per month to the Navy.

Alongside Lockheed’s work to upgrade the guidance technology on the torpedo, the Navy is also preparing to release a Request for Proposal, or RFP, to industry for a completion to build new Mk 48s.

Upgrades to the guidance control section in includes the integration of a system called Common Broadband Advanced Sonar System, or CBASS – electronics to go into the nose of the weapon as part of the guidance section, Jarvo explained.

“This provides streamlined targeting and allows the torpedo to transmit and receive over a wider frequency band,” Jarvo said.

“Digital information is used to guide the torpedo,” Jarvo said.

The Navy’s Mk 48 torpedo is also in service with Australia, Canada, Brazil and The Netherlands, Jarvo said.

“A heavyweight torpedo is unmatched in its ability to sink things. The Mk 48 is a unique capability in the fleet,” Richard said.