The U.S. Navy's Most Powerful Aircraft Carrier Just Showed Off Some New Technology 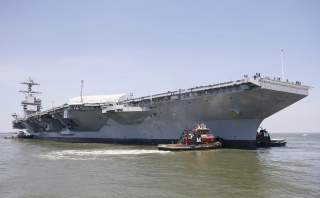 According to the U.S. Navy, Lt. Cmdr. Jamie Struck—a test pilot assigned to VX-23—flew a Boeing F/A-18F Super Hornet onto Ford to make an arrested landing. The jet made the trap catching the number two arresting cable—or “cross-deck pendant”—at 15:10 ET. Struck then made the first EMAL launch at 16:37 PM (EST).

"Great work by the Ford team and all the engineers who have worked hard to get the ship ready for this milestone."

Capt. Rick McCormack, Ford’s commanding officer, is proud of the work his crew has done.

“AAG and EMALS have been successfully tested ashore at Lakehurst, New Jersey, but this is the first shipboard recovery and launch of a fleet fixed wing aircraft," McCormack said.

“My team has worked closely with industry, Naval Air Systems Command (NAVAIR), and the flight test community to make this historic event in Naval aviation happen. I am very proud of my crew.”

Both the AAG and the EMALS—which are novel technologies designed to replace their hydraulic and steam-driven predecessors—have experienced teething problems. The AAG had to be redesigned while the EMALS still needs some software tweaks to launch aircraft at heavier weights.

Essentially, with the current software loads, the EMALS imparts too much force on heavier aircraft, which will eventually prematurely wear those jets out if the problem is not corrected. It does not, however, impact normal operations of the aircraft.

As Megan Eckstein at United States Naval Institute News reported, the problem with the EMALS software was discovered in 2014. The Navy finished dead-load testing the software fix in 2015 but Ford won’t receive the final version of the code until 2019.

“There is no urgency to apply the fix, as shipboard launches of F/A-18s with [external fuel tanks] will not be conducted until 2019, following CVN-78’s Post Shakedown Availability,” NAVAIR spokesman Rob Koon told USNI News.

“There will be no impact because the aircraft launched prior to that time will not have [external fuel tanks]. [Post-shakedown availability] is the next availability for incorporating the software updates aboard CVN-78 without disrupting its upcoming test schedule.”

The AAG and the EMALS are new technologies and there are bugs that will need to be worked out. However, once those glitches are fixed, the AAG and EMALs—both of which are digitally controlled—should offer much more precise control of launch and recovery forces, greatly reducing stresses on the Navy’s aircraft. It should allow for a wider variety of aircraft of different weights to be launched from the giant Ford-class vessels. It should also theoretically be much more reliable.

"Today is a validation of their dedication and hard work."