The US Navy's New Littoral Combat Ship: The Ultimate Mine Destroyer? 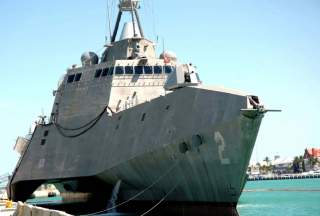 The Navy is hoping to fully resurrect Mine-Hunting technology for the Littoral Combat Ship such that it can find and eliminate threatening undersea mines with drones, helicopters and underwater sonar, service officials said.

The service plans to engineer a new “truck” or delivery mechanism for its sonar and undersea mine-detection technology as a way to ensure the system is integrated and functional by 2018. The move is part of a broader effort to improve reliability for the system by replacing a vehicle called a Remote Multi-Mission Vehicle, or RMMV. Reliability problems for the RMMV have resulted in delays and pauses to the Mine-Counter-Measures mission package designed for the LCS.

Having an operational mine-search-and-destroy technology aboard the LCS is perceived by Navy developers as essential to the ship’s mission. As a fast, multi-mission littoral vessel designed to both function independently and as part of an aggregated group, the LCS is tasked with providing reconnaissance and possible attack missions in support of larger ships – often hitting shallow water, ports or coastal areas in proximity to enemy forces where larger draft vessels are unable to operate.

“Navy made the decision to conduct a review with an independent review team to report out and set us up on an approach. We are changing the truck that carries the sonar,” he said.

The RMMV is a high-endurance, semi-autonomous, low-observable, unmanned, diesel-powered vehicle, operated and maintained from the LCS. It is designed to lower out of the back of an LCS down into the water, bringing a mine-searching AN/AQS-20A sonar with it.

The AN/AQS-20A incorporates five separate sonar/sensors in a compact, lightweight, and hydro-dynamically stable towed body. The AN/AQS-20A localizes mine-like objects and provides the operator with a visual image and a contact data list.  All mission data are recorded by the LCS for post-mission analysis.

Moton explained that the emerging plan resulted from extensive testing and technical analysis.

“We took the mission package to a technical evaluation last year. It was a very long test designed to test all aspects of the system using LCS 2 off the Pensacola, Fla., area. We went through a series of very realistic test runs. The system performed very well – the airborne laser system and mine neutralization system from helicopters,” Moton said

The RMMV is part of a larger integrated system consisting of a Remote Mine-hunting System below the surface and an Airborne Laser Mine Detection System, or ALMDS, above the water to locate the mines alongside an Airborne Mine Neutralization System, or AMNS, designed to destroy the mines once they are found, Navy officials said.

The RMS is comprised of an AQS-20 underwater sonar mine detection system which launches from an autonomous semi-submersible called the Remote Multi-Mission Vehicle, or RMMV.  The RMMV, which has both line-of-sight and over-the-horizon capability, Navy officials said.

As many as two RMMVs can operate from the LCS at one time.  The RMS works in tandem with the ALMDS, an airborne laser designed to scan the surface and shallow water for mines.  Data from both the RMS and ALMDS are assessed at a command center on-board the ship, he said.

Another key part of the mine-identification and neutralization calculus entails the use of a drone-mounted reconnaissance technology able to find mines on water surface, beach and coastal areas.

The Navy has conducted flight tests of the Coastal Battlefield Reconnaissance and Analysis, or COBRA, testing the system's performance on the MQ-8B Fire Scout helicopter-like vertical take-off drone.

The AN/DVS-1 COBRA system allows the MQ-8B to conduct unmanned aerial reconnaissance in littoral areas, detecting minefields and obstacles to prepare for amphibious assaults. Upgrades to the technology was designed to specifically address the beach zone and inland areas.

“We need a new truck for our towed sonar and that is what our focus is going to be,” Moton said.