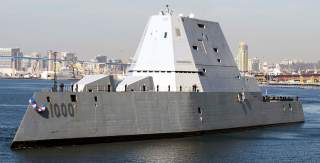 The Navy's new "first-of-its-kind," high-tech stealthy destroyer, armed with the most lethal weapons ever engineered onto a surface ship, is now  beginning what’s called “ship activation" - a process of integrating the major systems and technologies on the ship leading up to an eventual live-fire exercise of its guns and missiles.

As part of this process, the Navy will eventually fire long-range precision guns and missiles from its lethal, stealthy new destroyer -- in anticipation of its ultimate deployment on the open seas, service and industry officials explained.

The new destroyer, called the USS Zumwalt, is a 610-foot land and surface warfare attack ship designed with a stealthy, wave-piercing “tumblehome” hull.

Raytheon has been chosen to begin mission systems testing, engineering services and ship activation duties in support of the Navy’s Zumwalt-class destroyer program.

The deal, which could reach $500 million, will include production, integration and testing on the ship, a Pentagon announcement said.

This work corresponds to the ongoing work of the Navy and Raytheon on the Zumwalt next-generation computer systems and blade servers being tested aboard the ship.

"The U.S. Navy accepted delivery of the most technically complex and advanced warship the world has ever seen," Rear Adm. (select) James Downey, DDG 1000 Program Manager, said in a written statement last year.

“In the next phase, the Navy will be driving, connecting, integrating and proving the functionality of the ship systems such as the radar, sonar and gun. The Navy will test out the basics make sure the ship can work then by testing those components of the ship that actually make it a warship,” Wade Knudson, DDG 1000 Program Manager, Raytheon, told Scout Warrior in an interview last year.

The Navy continues to update the USS Zumwalt's  total ship computing environment, meaning that the software and blade servers manage not just the weapons systems on the ship but also handle the radar and fire control software and various logistical items such as water, fuel, oil and power for the ship, Raytheon officials said.

Many of the blade servers and other technical items are housed in structures called electronic modular enclosures, or EMEs. There are 16 EMEs built on each ship, each with more than 235 electronics cabinets. The structures are designed to safeguard much of the core electronics for the ship.