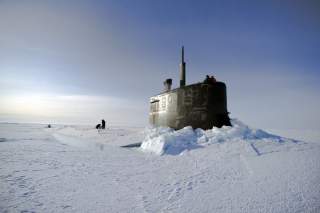 The Navy is analyzing research findings from efforts to deploy underwater drones beneath the ice in the Arctic Ocean to assess how quickly the ice is melting and understand how soon the U.S. and Russia will be competing for new strategic waterways in the region.

The drones had been measuring the temperature and salt content to help scientists develop more accurate computer models with which to predict the anticipated future pace of melting ice, Martin Jeffries, science advisor to the Office of Naval Research, or ONR, told Scout Warrior.

The Navy's unveiled its Updated Arctic Road Map that explains how increasing water temperatures and decreasing ice layers mean the service will need to increase the number of ships in the region over the next 20 years, Jeffries said.

Alongside the drone research, ONR scientists have also been studying the impact of the waves upon the ice cover, water temperature and surrounding atmosphere.

“Waves can be damaging to the ice cover when they crash into the ice. It can accelerate the melting,” Jeffries said.

“What we're seeing as the sea ice retreats and we are exposing more ocean surface to the atmosphere - then we are seeing the surface waters become warmer due to absorption of solar radiation,” Jeffries told Scout Warrior in an interview.

Jeffries explained the scientific basis for the phenomenon by pointing to what's called the ice "albedo feedback mechanism," a term used to describe the reflectivity of the surface ice.  Surface ice has a much higher "albedo," allowing it to reflect sunlight and solar radiation back into the atmosphere.

Jeffries explained that water is much darker and has a low ‘albedo' – it absorbs a lot more solar radiation which heats up the water.  Warmer waters then, in turn, lead to the melting of more ice.

Underwater Drones Beneath the Ice

Navy scientists have had success in the Arctic using an underwater drone called the Seaglider, a 110-pound, 2.8-meter autonomous underwater robot able to lower acoustic sensors to depths of 1,000 meters. The Seaglider, originally developed by the ONR for open ocean data collection, can be used to gather information beneath the surface of the ice, Jeffries explained.

By the end of the summer in 2014, the science team had deployed over 100 robotic platforms in the ice and the ocean, Jeffries explained.

The Seagliders were programmed to receive acoustic signals or "pings" from underwater sources suspended on cables beneath buoys frozen into the ice at fixed locations, providing precise latitude and longitude information for the drones, Jeffries explained.

Measuring the temperature of the water beneath the ice helps scientist understand how much greater exposure to wind and sunlight is mixing up the water column and potentially raising the water temperature.

Knowing the precise temperatures of water beneath the surface of the ice and water can provide scientists with valuable information about the extent to which wind is mixing up an otherwise highly stratified water column, moving up warmer water from deeper beneath the surface.

Wind-mixing could break down this water stratification and bring heat from deeper into the ocean up closer to the surface, creating warmer water which leads to more ice melting, Jeffries said.

Jeffries explained that the wind creates more turbulence in the water column which can mix up the water column and reduce the stability – allowing heat warmer water from deeper down to come up to the surface.

The Office of Naval Research is also exploring technologies designed to improve the Navy’s ability to operate in the cold, snow, ice and fog of theArctic waters.

Russian President Vladimir Putin's recent aggressive stance in Ukraine has added to the urgency of this research as the Russian Navy also has plans to increase their presence in the region. More Arctic Ocean waterways mean quicker and more prevalent routes for Russian ships to North America.

The Navy's Arctic Road Map addresses these threats and explains how the U.S. will require more ships in the region as the ice melts away. Predicting how quickly it will melt helps Navy leaders plan how many ships that will entail, Jeffries said.

The Navy has updated its 2009 Arctic Road Map which includes mission analysis and “fleet readiness” details for the Arctic environment, including search and rescue, maritime security, C4ISR, cooperation with the U.S. Coast Guard, strategic sealift and strategic deterrence, among other things.

An assessment done by the Navy’s Task Force Climate Change determined that the rate of melting has increased since the time of this report.  Therefore, part of the new, “updated” roadmap is to bring the most current scientific projections regarding the changing ice and water conditions in the Arctic.

Although the thinning of the Arctic ice was reported by Navy submarines in the 1990s, there have been considerable changes to the Arctic environment since that time, Robert Freeman, public affairs officer for the oceanographer of the Navy, said last year.