The Very Backbone of the U.S. Navy Is in Big Trouble 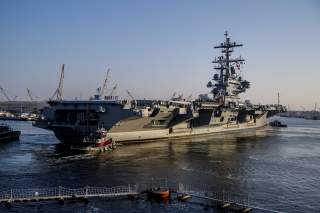 The backlog of maintenance is so bad that it will take until 2036 to clear, according to a new report from the Government Accountability Office.

“Navy data show that the cost of backlogged restoration and maintenance projects at the shipyards has grown by 41 percent over five years, to a Navy-estimated $4.86 billion, and will take at least 19 years (through fiscal year 2036) to clear. Similarly, a Navy analysis shows that the average age of shipyard capital equipment now exceeds its expected useful life.”

The poor condition of the shipyards has a direct operational impact on the fleet.

“Partly as a result of their poor condition, the shipyards have not been fully meeting the Navy's operational needs,” the report states.

“In fiscal years 2000 through 2016, inadequate facilities and equipment led to maintenance delays that contributed in part to more than 1,300 lost operational days—days when ships were unavailable for operations—for aircraft carriers and 12,500 lost operational days for submarines. The Navy estimates that it will be unable to conduct 73 of 218 maintenance periods over the next 23 fiscal years due to insufficient capacity and other deficiencies.”

The U.S. Navy has developed a plan to address the problem, but those plans may not be equal to the task.

“Though the Navy has developed detailed plans for capital investment in facilities and equipment at the shipyards that attempt to prioritize their investment strategies, this approach does not fully address the shipyards' challenges, in part because the plans are missing key elements,” the GAO report states.

“Missing elements include analytically-based goals and metrics, a full identification of the shipyards' resource needs, regular management reviews of progress, and reporting on progress to key decision makers and Congress.”

The GAO’s recommendation to the Navy—which the service concurred with—is to essentially develop a more carefully thought-out plan to tackle the issue.

”GAO recommends that the Navy develop a comprehensive plan to guide shipyard capital investment, conduct regular management reviews, and report to Congress on progress in addressing the shipyards' needs,” the report states.

“DOD concurred with all 3 recommendations.”