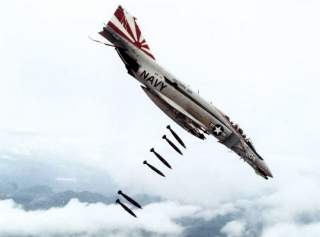 “Our objective in South Vietnam has never been the annihilation of the enemy. It has been to bring about a recognition in Hanoi that its objective—taking over the South by force—could not be achieved.” —President Lyndon Johnson in a nationwide address on March 31, 1968 explaining his decision to halt the bombing of North Vietnam.

“I shall not seek and I will not accept the nomination of my party as your President.” —President Lyndon Johnson telling the nation on March 31, 1968 that he would not seek reelection.

“The commitment of five hundred thousand Americans has settled the issue of the importance of Vietnam. For what is involved now is confidence in American promises.”—Incoming National Security Adviser Henry Kissinger writing in the January 1969 issue of Foreign Affairs.

“The time has come when the United States, in our relations with all of our Asian friends, be quite emphatic on two points: One, that we will keep our treaty commitments… but, two, that as far as the problems of internal security are concerned, as far as the problems of military defense, except for the threat of a major power involving nuclear weapons, that the United States is going to encourage and has a right to expect that this problem will be increasingly handled by, and the responsibility for it taken by, the Asian nations themselves.”—President Richard M. Nixon speaking at an informal press conference on Guam on July 25, 1969 setting forth what becomes known as the Nixon Doctrine.

“I refuse to believe that a little fourth-rate power like North Vietnam doesn’t have a breaking point.” —National Security Adviser Henry Kissinger speaking in July 1969 to NSC aides as he charged them with developing a punitive military strategy that would coerce North Vietnam into negotiating on American terms.

“And so tonight—to you, the great silent majority of my fellow Americans—I ask for your support.” —President Richard Nixon in his address to the nation on the war in Vietnam on November 3, 1969.

“Let us understand: North Vietnam cannot defeat or humiliate the United States. Only Americans can do that.”—President Richard Nixon in hisaddress to the nation on the war in Vietnam on November 3, 1969.

“If, when the chips are down, the world’s most powerful nation, the United States of America, acts like a pitiful, helpless giant, the forces of totalitarianism and anarchy will threaten free nations and free institutions throughout the world.”—President Richard Nixon in a nationwide address on April 30, 1970 explaining his decision to invade Cambodia.

“This war has already stretched the generation gap so wide that it threatens to pull the country apart.” —Senator Frank Church (D-ID) speaking on the Senate floor on May 13, 1970.

“The United States, which brought these actions to enjoin publication in the New York Times and in the Washington Post of certain classified material, has not met the ‘heavy burden of showing justification for the enforcement of such a [prior] restraint.’” —U.S. Supreme Court rulingon June 30, 1971 overturning the injunction barring the New York Timesand the Washington Post from publishing the Pentagon Papers.

“The bastards have never been bombed like they’re going to be bombed this time.” —President Richard Nixon to White House Chief of Staff H.R. “Bob” Haldeman and Attorney General John Mitchell on April 4, 1972 in deciding to launch what would become known as Operation Linebacker,a massive escalation in the war effort that that included mining Haiphong harbor, blockading the North Vietnamese coast, and launching a massive new bombing campaign against North Vietnam.

“Come home to the affirmation that we have a dream. Come home to the conviction that we can move our country forward.”—Senator George McGovern (D-SD) in his address accepting the presidential nomination at the Democratic National Convention on July 14, 1972.

“We believe that peace is at hand.” —National Security Advisor Henry Kissinger speaking at a White House press conference about theParis Peace negotiations on October 26, 1972, two weeks before the presidential election.

“I have asked for this radio and television time tonight for the purpose of announcing that we today have concluded an agreement to end the war and bring peace with honor in Vietnam and in Southeast Asia.”—Richard Nixoninforming the American public in a nationwide address on January 23, 1973 that the United States had reached agreement with North Vietnam on the Paris Peace Accords.

“Today, America can regain the sense of pride that existed before Vietnam. But it cannot be achieved by refighting a war that is finished as far as America is concerned. As I see it, the time has come to look forward to an agenda for the future, to unify, to bind up the Nation’s wounds, and to restore its health and its optimistic self-confidence…. We, of course, are saddened indeed by the events in Indochina. But these events, tragic as they are, portend neither the end of the world nor of America’s leadership in the world.” —President Gerald R. Ford in a speech at Tulane University on April 23, 1975.

“During the day on Monday, Washington time, the airport at Saigon came under persistent rocket as well as artillery fire and was effectively closed. The military situation in the area deteriorated rapidly. I therefore ordered the evacuation of all American personnel remaining in South Vietnam.” —President Gerald Ford’s statement announcing the evacuation of United States personnel from the Republic of Vietnam on April 29, 1975.

Rachael Kauss and Alex Laplaza assisted in the preparation of this post.