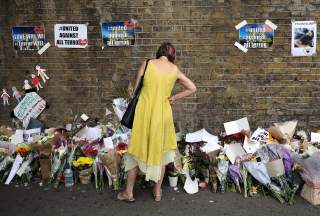 The West has a problem with terrorism, but it’s in addition to the one you’re probably thinking. Almost a year to the day after Jo Cox, a British MP, was murdered by a far-right white supremacist. Yesterday, British Muslims outside their house of worship in London were targeted in a vehicle attack by a man who reportedly said, “I want to kill Muslims.” This latest incident of far-right inspired violence comes just weeks after two Americans were killed in Portland, Oregon for coming to the defense of two Muslim women on a commuter train being harassed over wearing a headscarf. And it follows the January shooting in a Quebec mosque that claimed the lives of six Canadian Muslims.

An April 2017 study by the Government Accountability Office found that over the last fifteen years, there have been nearly three times as many violent attacks in the United States perpetrated by far-right extremists that resulted in fatalities than those who claimed to be motivated by Islamist terrorist groups. Attacks by far-right extremists and Islamist inspired groups resulted in roughly the same number killed. An example of a far-right attack—which took place just over two years ago—was the murder of nine African Americans attending a bible study at a church in Charleston, South Carolina. The gunman, Dylann S. Roof, a white supremacist, later stated that he wanted to start a race war.

Similarly, a 2012 study by the Combatting Terrorism Center at the U.S. Military Academy at West Point concluded that, “since 2007, there has been a dramatic rise in the number of attacks and violent plots originating from individuals and groups who self-identify with the far-right of American politics.”

Part of the problem is the wildly divergent ways the media cover these attacks and portray the perpetrators of extremist violence based on their race and religion. A recent Georgia State University analysis of the media’s coverage of violent attacks found that “attacks by Muslim perpetrators received, on average, 449 percent more coverage than other attacks.” In a stomach churning example of the different ways attackers are portrayed, the alleged perpetrator of Sunday night’s attack in Finsbury Park was called a “clean shaven white man” in the right-wing tabloid the Daily Mail. The same paper quickly labeled the perpetrators of the Borough Market attack terrorists and an alleged coconspirator arrested last week as an “Islamic fanatic.”

It is not just the media’s attention that is different based on the perpetrator. President Donald Trump issued multiple statements within hours of the Borough Market terror attacks, even taking out of context a comment from London Mayor Sadiq Kahn, who is Muslim, to criticize the mayor’s response to the attacks. As of this writing, President Trump has not yet commented on the Finsbury Park attack. Trump was also conspicuously quiet in the aftermath of the Quebec mosque and Portland attacks.

Simply ignoring the problem would be one thing. But conservatives in the United States have actively sought to suppress examination of the growing problem of far-right extremism. For instance, when a team of career officials at the Department of Homeland Security (DHS) issued a report in 2009 warning of the increasing risk of far-right extremism in the United States, Republicans in Congress and outside conservatives reacted so strongly that DHS withdrew the report and disbanded the team covering the issue. More recently, the Trump administration has worked to steer efforts targeting violent extremism to only focus on Islamist terrorism, and has slashed funding for such efforts in its budget proposal.

It has become politically advantageous in many Western countries to stoke both anti-Muslim bigotry and victimization of right-wing political views. That dynamic intensifies the focus on the threat posed by Islamist terrorist groups, while minimizing attention of far-right extremists. But the evidence clearly shows that deadly far-right attacks are on the rise. We must break through our biases and learn to assess the threat of violent extremism not simply through the race or religion of the perpetrators, but also through the level of danger to the public.

Ken Gude is a Senior Fellow at the Center for American Progress.

Image: A woman looks at messages at the base of a wall near the scene of an attack next to Finsbury Park Mosque, in north London, Britain June 20, 2017. REUTERS/Marko Djurica.