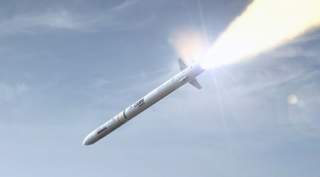 Today, the United Kingdom’s defense of the Falkland Islands in the South Atlantic from air attack rests with four Eurofighter Typhoon jets and a detachment of 1970s-vintage Rapier anti-aircraft missiles — although Britain might have some short-ranged Starstreak missiles stashed away at RAF Mount Pleasant.

But the Rapier is getting old and both it and Starstreak are short ranged, capable of engaging targets out to a distance of four to five miles. During the 1982 Falklands War, Britain claimed it downed 20 Argentine aircraft with Rapiers, but Argentina credited the missile with shooting down no more than one to three — and both sides overstated enemy losses.

Britain, at the time, was still marketing the Rapier for sale abroad.

Thus, Britain will need to shore up its Falklands air defenses within the next few years, as Argentina has not given up its claims to the islands — although its military would find an invasion extremely difficult. Argentina’s 1998 economic depression shattered its military, and its air force is now without combat-capable air-to-air fighters.

Mauricio Macri, Argentina’s president since 2015, has not abandoned Argentina’s claim but he has adopted a calmer tone than his predecessor.

In any case, defense weapons are insurance policies, and Britain cannot guarantee that a future Argentina won’t rebuild its military. Argentina has tried to shop for fighter jets, so far without success. But the situation could change.

The British military has also shrunk considerably since the 1980s, and will only have one operational carrier at any given time — given maintenance needs — once the twin Queen Elizabeth-class carriers become operational in the 2020s. Currently, Britain’s sole carrier is the helicopter-carrying HMS Ocean.

So by 2020, Britain plans to replace the Rapier with the all-weather, radio frequency-guided Common Anti-Air Modular Missile — or CAMM. The warhead can either detonate on contact or in proximity to a target.

As a medium-range missile, CAMM can fly out to around 15 miles, triple the Rapier’s range. Manufacturer MBDA is developing an extended range version that can reach beyond 27 miles but only for export. Even better, the missile is more agile as doesn’t require its radar to stay within line of sight to a target — a big downside for missiles such as Rapier. Basically, CAMM relies on a larger sensor network to allow it to “see” in more places.

The way this works — CAMM receives data from the Giraffe AMB, a Swedish passive electronically scanned array radar that can search for targets at distances of 75 miles. This is all linked together through an Israeli battle management system developed for Iron Dome.

The U.K. Ministry of Defense handed over a £78 million contract to Israeli firm Rafael for that system in December 2016, a deal which was only recently made public.

This was controversial as Israel is not a NATO member and has also sold weapons to Argentina, but Britain has bought Israeli weapons before. In 2007, the United Kingdom secretly bought Israeli Spike missiles and deployed them to Iraq and Afghanistan.

There’s a separate program to put a naval variant of CAMM known as Sea Ceptor on the Royal Navy’s Type 23 destroyers and future Type 26 frigates. This all means that Argentina’s existing narrow window to retake the Falklands will, within the next few years, snap shut.